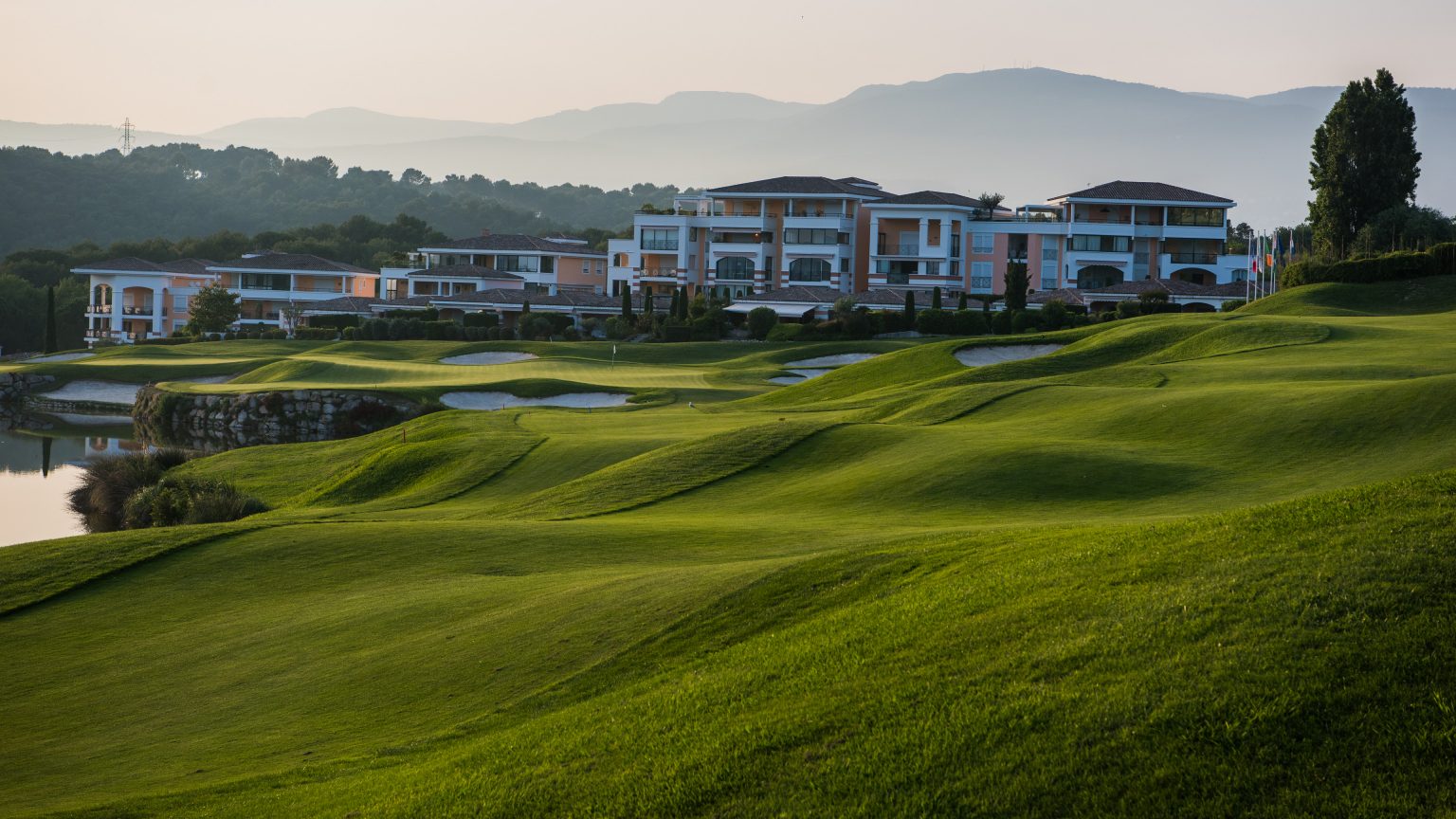 A golf weekend on the French Riviera

Who can resist a weekend on the French Riviera – Sunshine and beachside bars, gourmet dinners, mixing with the jet set, and lots of culture? We set out to try to experience all of the above, while making time for some golf.

Golf on the Riviera is steeped in tradition, with many championship courses dating back as far as the late 19th century. Our choice for this weekend trip was Royal Mougins Golf Resort, a quick 20 minutes from the easy to reach airport in Nice.

After checking in to our rooms overlooking the golf course, instead of dashing directly to the first tee like we usually do, we decided the head over to the nearby village of Old Mougins to take in a little culture and get immersed in the relaxed French way of life. The village is nested in the mountains, beautifully surrounded by the Valmasque forest.

Mougins has over the years been home to many famous people such as Pablo Picasso, Christian Dior, Winston Churchill, Catherine Deneuve, and Édith Piaf, something that we are instantly reminded of when entering the village. In the main square we find two men playing boule under the watchful eye of Picasso, who made Mougins his home for the last 12 years of his life.

Walking around in Mougins immediately makes you more relaxed. You walk down narrow alleyways, lined by art studios and outdoor cafes. The town has been a center for art throughout history and is now home for many local artists of all genres. You could easily spend an entire day just exploring the galleries.

Anyone who has at least a minimum of interest in art history should not miss the Mougins Museum of Classical Art. MACM came about when the British investor Christian Levett began finding his house too small and cluttered (on an investment manager scale) to house his growing art collection. In 2008 he decided to do something about it, and in 2011 the MACM opened with mostly classical art from his collection. The museum is organized with four floors, one of which houses the largest private collection of Greek and Roman armory in the world, all brilliantly displayed.

In an interesting twist, classical art is sometimes intermingled with modern impressions, creating a fascinating juxtaposition. The museum curators are very knowledgeable and quite dedicated to give you an experience you will not forget.

After all this culture we were ready to experience a different art form that has been prevalent in Mougins throughout history; culinary art. There are many fine restaurants in Mougins, but we settled on maybe the most famous of them all, L’Amandier. Situated at the heart of the village in an old courthouse from the Middle Ages, L’Amandier has over the years been the home of world class chefs like Roger Vergé and Alain Ducasse, and nowadays Denis Fetisson manages the restaurant

I won’t go into a detailed review of the food, but suffice it to say that you won’t be disappointed. Just look at the menu in the photo and you will understand.

The next morning we woke up to beautiful sunshine. It was finally time for golf.

Royal Mougins Golf Resort was designed by Robert van Hagge and opened in 1993. Already from the beginning it was hailed as one of the best courses in France, and in the last year it has undergone a comprehensive upgrade, primarily of the bunkers and irrigation system, so we were very curious to see the result. It would soon be obvious that the investment has paid off.

The course is beautifully laid out in a forested valley in the mountains just above the city of Cannes. At first you are lulled into complacency by the sheer beauty of the landscape, but it soon becomes clear that this is not a course to take lightly.

To get to the first tee you have to walk up the hill above the clubhouse, and the first hole climbs a bit more. But already on the second hole you get to what may be the signature hole. A short par three, steep downhill in a ravine to a green guarded by a big pond, it challenges you to select the right club or you will be in trouble. A stunning view and a very rewarding experience if you find the green.

Once you complete the hole, you are down on the same level as the clubhouse. The third hole is a par five that takes you back to a wonderful stadium-like green complex (shared with the 18th green) just below the clubhouse and apartments. This is one of the most beautiful areas on the whole golf course, and also a very good golf hole.

The next few holes run back and forth in this area, until you cross the road to get to one of my favorites, hole number seven. The par four starts high with a small lake encroaching on the landing area, and then goes back uphill to a green protected by bunkers and trees. Again, playing strategically is more important than long hitting.

The course does not come back to the clubhouse after the first nine holes. There is a small halfway house at the 7th tee, and after that the course just continues.

The back nine features a couple of holes where big hitters have to make risk/reward decisions. Both the 12th (298m) and the 14th (355m), both par four, are drivable dogleg holes if you are willing to cut the corner and hit your drive over the trees.

The 2nd may be the signature hole, but my personal favorite on the course is the last one, a 515m par five. After a reasonably straightforward drive, you are presented with two alternative ways to play the hole. Take the longer, safer high road, or the shorter but riskier lower path along the water. If you take the riskier path, you have a chance to reach the green in two. Many tournaments will be decided here. A great golf hole.

Looking back at the round, it is clear that the course is very much a player’s course. You have to play strategically and be able to master the complete golf game, not just long drives and good putting. While some holes are quite long from the back tees, more often than not long drives are not essential.

For more information and details of the course, see the article Royal Mougins Golf Club.

Mixing with the jet set

After a quick but delicious lunch on the clubhouse terrace we headed down to nearby Cannes to stroll along the beach to the harbor to admire the yachts, one bigger than the other. Just when we thought they couldn’t get any bigger, we spotted the Eclipse, owned by the oligarch Roman Abramovich, owner of Chelsea FC. Eclipse is a very fitting name, since this yacht eclipses any yacht I’ve ever seen. At 162.5 meters and 13,000 tonnes it is closer to a cruise ship than a yacht. It features, among other luxuries, 24 cabins, a couple of swimming pools, a disco hall, two helicopter pads and a mini-submarine. And to discourage any fans from competing football teams from doing anything stupid, it is also fitted with a missile detection system.

For our own nautical excursion, we opted for speed over size. Not that our VanDutch yacht was particularly small, but it was clearly optimized for speed. Once we had puttered out of the harbor, our captain hit the gas and we were literally pushed back in our seats. 40 knots! Now we were no longer just mixing with the jet set, we were the jet set.

The ride over to Île Sainte-Marguerite was all to short at 40 knots, but our mixing with the jet set didn’t end. We docked at the private dock of La Guérite, a restaurant and bar popular with the rich and famous, and were treated to champagne and an afternoon in the sun. Seeing the delicious seafood on offer, we were tempted to stay for dinner, but another gourmet experience was already scheduled back at the clubhouse restaurant. Sometimes life seems too good to be true.

The sunset dinner on the clubhouse terrace didn’t disappoint. The kitchen at the club is really first rate, and the view over the 18th green left us wanting more.

The next morning we again woke up to the kind of sunshine and nice climate the French Riviera is famous for. We had time for one more round of golf.

This time we opted for buggies. That, in combination with a bit more knowledge of the course layout really helped with the scoring. This is a course you really want to play more than once, not just for the beautiful experience but also so that you know which landing areas to shoot for, and which shortcuts to avoid. Experience with the course is really important here, and the second round was even more pleasurable than the first. I just wish we had time for a few more rounds, but now it was time to round off the weekend with another sumptuous clubhouse lunch, a bit of recovery at the spa, and then head for home.

Ticking off all the boxes

In a short few days, we managed to tick off all the boxes: Culture in Mougins Old Village, sun and beachside bars on Île Sainte-Marguerite, mixing with the jet-set in Cannes and on the VanDutch, and several gourmet dinners. On top of that two rounds of golf on one of the best parkland courses I’ve played.

All in all it turned out to be a very successful weekend indeed.

Royal Mougins Golf Resort is a semi-private club. What this means is that while private, the course is open for green fee guests. There are also a number of well-appointed rooms and suites that you can book for a few nights stay.

Even better, a limited number of apartments overlooking the golf course are available as time-shares. We stayed in one of them, a one bedroom with a small kitchen, living room, and a veranda overlooking the course and the clubhouse. Absolutely stunning, if you have the time and money to invest. For more information, contact the resort.