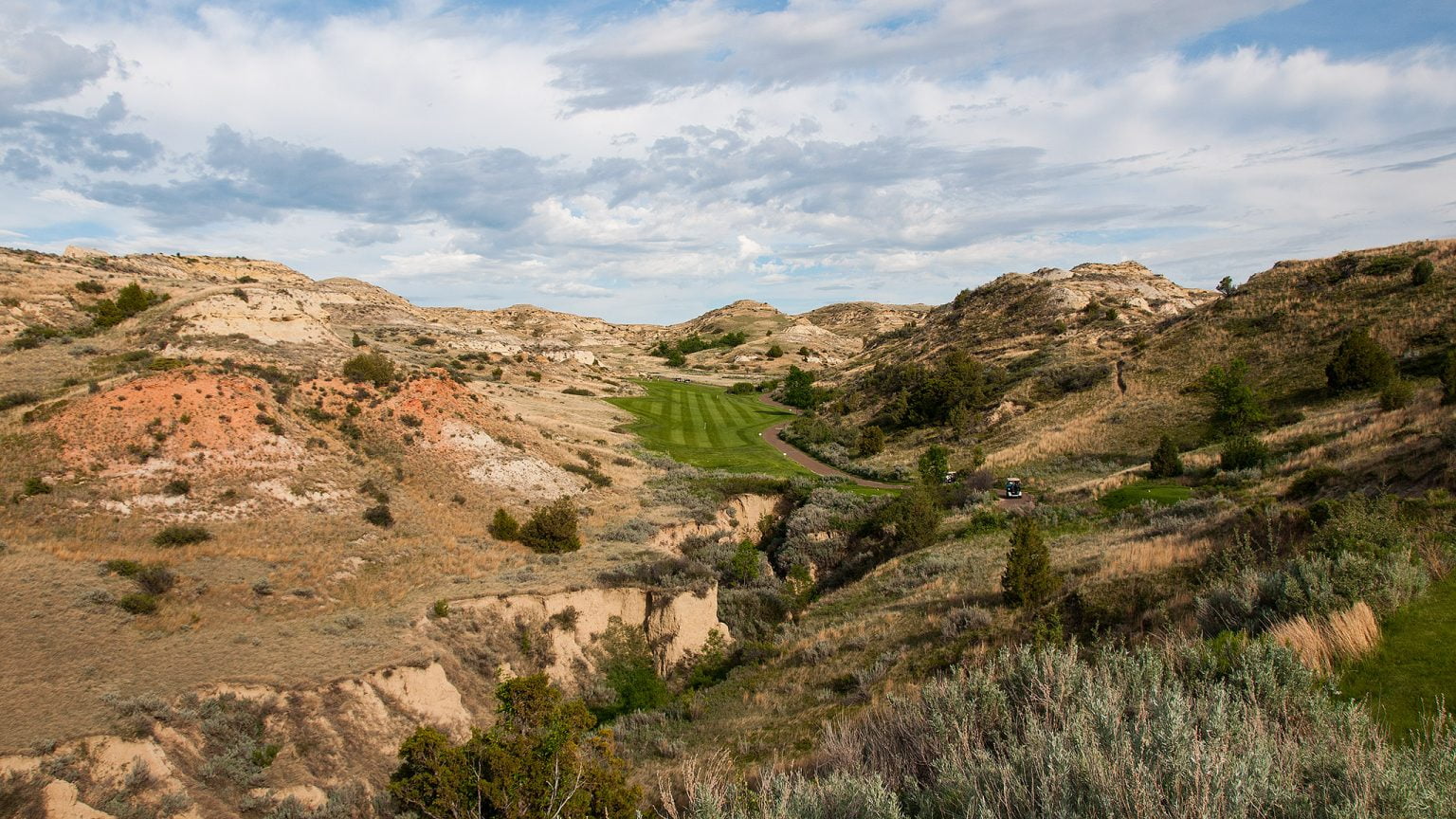 Bully Pulpit – Golf in the Badlands

Bully Pulpit doesn’t have Southern California weather, nor does it have an ocean view. But you’d be hard-pressed to find a more beautiful and challenging golf course anywhere. If you’re headed to North Dakota, make sure you don’t miss this course.

“Badlands is a type of dry terrain where softer sedimentary rocks and clay-rich soils have been extensively eroded by wind and water. Canyons, ravines, gullies, hoodoos, and other such geological forms are common in badlands. They are often difficult to navigate on foot. Badlands often have a spectacular color display that alternates from dark black/blue coal stria to bright clays to red scoria.”

Difficult to navigate by foot. Canyons, ravines, and gullies, not to mention hoodoos (you can subtract five strokes if you know what a hoodoo is). What comes to mind, if not the construction of a golf course? At least that was the reasoning of Dr. Michael Hurdzan, the course designer, when he saw the land. “Although I have seen thousands of potential golf course sites, this one near Medora, North Dakota, may be the best I have seen without ocean views” he said.

Said and done. The course was built in the early 2000s and has quickly become one of the biggest attractions in North Dakota. It has, among other things, been named the best new public golf course in the USA by Golf Digest, and been in the top ten golf courses open to the public by Golf Magazine.

When the course was designed and built, it was a priority to leave nature as undisturbed as possible. The course was adapted to nature, instead of the other way around. By locating the course at the foot of the natural hills of the Badlands the course got a nice, varied layout, with some holes in the mountains, and some along the Little Missouri River, in the more level part of the landscape.

You find the course only a few minutes outside the quaint town of Medora, a town with a rich history from the pioneer era. Medora is definitely worth spending a day or two in, especially for the history buff.

The course starts, as golf courses should, with a relatively easy par four. The front nine plays on fairly flat terrain, in a mix of meadows and forest landscape, very scenic along the Little Missouri River. The holes are well designed, each one with its own quirk or difficulty.

The 3rd hole has an interesting history. Here, General Custer pitched his tent in June of 1876, on his way to the fateful Battle of the Little Big Horn that was to become known as Custer’s Last Stand. But at the time they stayed at ”Crook’s Feast” they were still full of optimism, blissfully unaware of what was to come. A bit like the golfer who finds the course pretty easy so far…

It is the back nine that reveals the real stunners. The course starts climbing, and the view is magnificent. On the 14th hole, ”Peaceful Valley”, it gets really interesting. On paper it’s an easy par 4, only 395 yards from the club tees. But when you look out from the tee it looks completely impossible. A small fairway, tilting severely to the right, far, far away below the tee. No grass in the rough, only ”Badlands” as far as the eye can see. Straight and long is the only thing that works.

The 15th, ”Bully Pulpit”, is the hole that gave its name to the course. A 153 yard par three, played from one hill to another with a ravine more accurately described as a wind tunnel in between. Many consider this ”Golf’s most frightening par three”. And one of golf’s most photographed holes. ”Bully Pulpit” is also featured on Golf Digest’s list of 18 holes in the US that you have to play.

If you survived ”Bully Pulpit” you are rewarded with ”Perched Rock”, as straight par 4 heading straight downhill. Time for the longest drive of the day, propelled by the thin air in the hills of North Dakota. The green is beautifully chiseled into the foot of at butte, which is what you call the hills here in the Badlands.

The 17th is yet another steep downhill hole, a par five with several bunkers in your line of play. You have to make a choice, either play safe to the right or more aggressively near the river to the left. That’s right, the river. If you’re short you have to go fishing.

Back on more level ground, you may think that the difficulties are over, but not so. Number 18 gives you one last challenge, with a tricky approach to an elevated green. A worthy finishing hole.

You’ll find the Bully Pulpit address, website, greenfees, and all the details in our course description.

Visit medora.com to find out about all the other attractions and events in Medora.