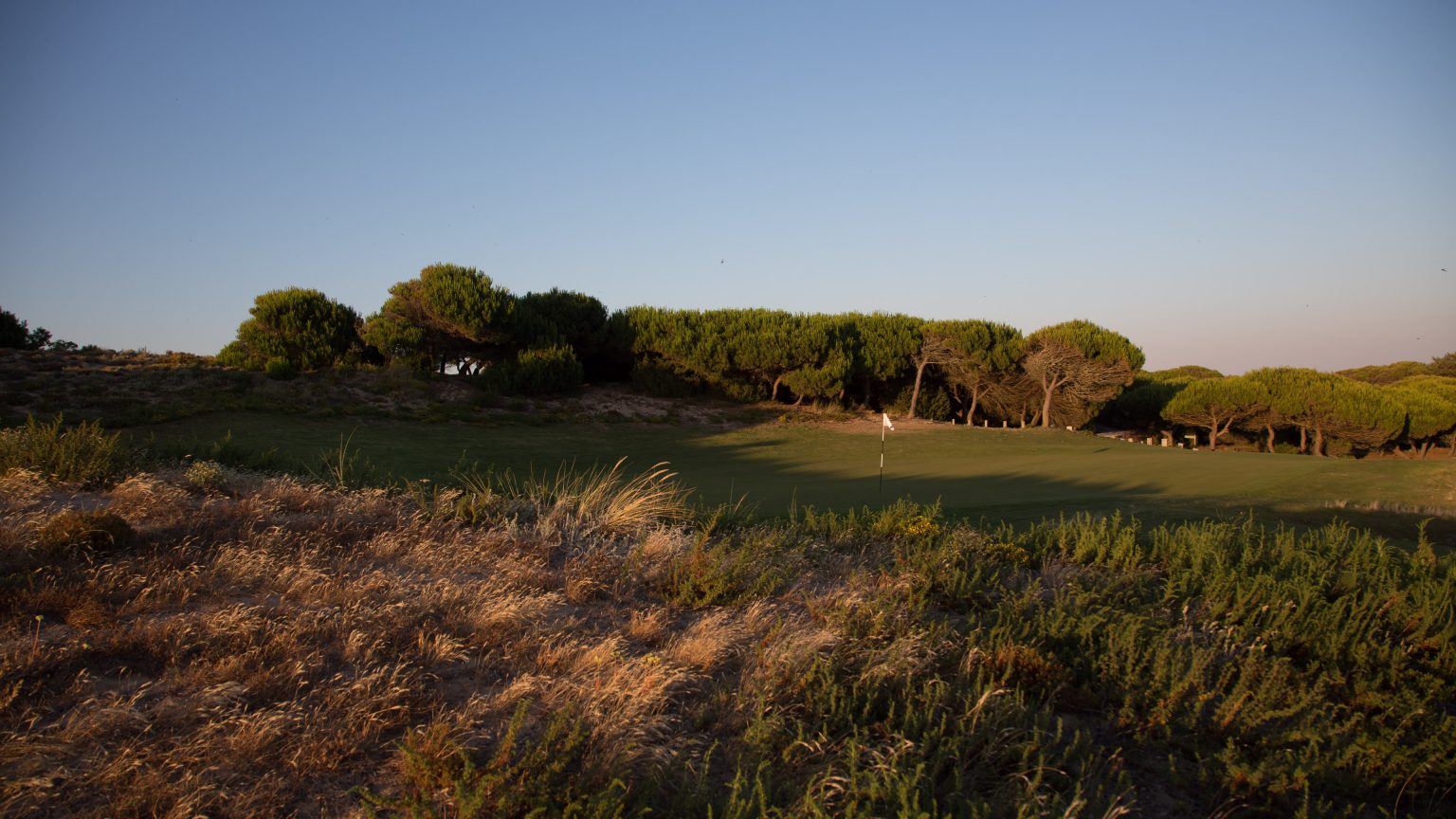 Playground of royalty, jet setters, diamond dealers, exiles and spies – Cascais is the place to go if you want your golf served warm, with a little bit of sophistication, rugged landscape, picturesque beaches, great seafood restaurants and one of Europe’s exciting capital cities within easy reach.

Cascais, just 20 minutes from Lisbon by metro train, has a secluded and sheltered feel to it. Let the masses with their parasols and beach balls head to the Algarve in the south. Cascais is something altogether different. It’s for people with a love of Portuguese culture, urban joys contrasting with spectacular natural settings and the traditions of an historic fishing village. There’s a reason it’s gained a reputation as Portugal’s playpen for the rich, with the highest property prices in the country.

The coastline that includes Cascais, Estoril and Sintra has a long history and is sometimes called the Portuguese Riviera. The Phoenicians, Romans and Moors each left their imprints, building forts and castles that remain today. The Portuguese royals used the coast for rest and relaxation since the middle ages and royalty from across Europe started visiting Cascais in the late 19th Century. During the Second World War it was a known hangout for exiles and spies. The casino in Estoril is inspiration for Ian Fleming’s James Bond novel, Casino Royale.

Today Cascais keeps some of the flairs of this history, and with the grand architecture, the lively nightlife with open-air cafés on narrow, cobblestoned streets and modern apartment buildings that attract multi-millionaire diamond dealers from Angola. You might think it prices itself out of the market. In fact, Cascais is not just the domain of the very rich. With the economic hardship that Portugal has weathered, prices are competitive for international visitors. It still has the feel of a small fishing village, and the boats with their fresh catches come in the harbor every morning. Praia do Guincho is known as one of the world’s best beaches for surfers and windsurfers.

The people are exceptionally friendly. Taxi drivers will converse happily, perhaps even in English or French, dwelling on topics such as how much friendlier they are here in Portugal than over there in Spain!

We must not forget the most important facts. The climate is perfect in the spring and fall, with warm temperatures lasting through September and often into late October. There are seven golf courses in the immediate vicinity of Cascais, and they have all joined forces to offer visitors the Golf in Cascais Passport, where you can choose three or five of the courses to play on weekdays (weekends upon request) – which should add up to enough golf to keep all but the most addicted golfers happy for a week.

Between your three or five rounds there are plenty of other experiences to enjoy. The pleasures of Lisbon are at your doorstep, with all on offer there being too much to delve into here (keywords: street cafés, fado music).

If you want to explore the area around Cascais you can start with a visit to the Parque Natural Sintra-Cascais woodlands in the hills a half hour’s drive away, to take in the soaring view from the top of the mountain.

You could also stop by the Adega Viuva Gomes winery on the way down from Sintra, to have a chat with José Baeta, who will tell you all about Portuguese winemaking traditions, which he and his family are keeping alive. Why haven’t you heard of any famous Portuguese grape varieties? Because there are too many – in fact, hundreds. Even the Portuguese can’t remember their names. It doesn’t mean that they aren’t excellent grapes. After José helps you bottle and personally label a Colares wine, you could make your way to one of Europe’s top beaches, Praia da Adraga. It will make you feel like you’ve stepped right into a glossy coffee table book. The beach restaurant is known for its seafood.

Eventually, it might be an idea to head over to one of the seven golf courses. We sampled two, Oitavos Dunes and Lisbon Sports Club.

Oitavos Dunes is set within the Parque Natural Sintra-Cascais, not too far from the most western point of Europe, at Cabo da Roca. It’s the course everyone seems to think of first when you tell them you’ve been off golfing in the Lisbon area. The luxury hotel The Oitavos opened in 2010 – not exactly optimal timing as Portugal and Europe were in the depths of the financial crisis. This was nine years after the course opened in 2001.

The price of membership at Oitavos Dunes has now been brought down – no more exorbitant initiation fee, only an annual fee (albeit not cheap, at 2750 euros). The hotel has a sleek, modern and expensive look to it, bare white surfaces, straight lines and lots of floor-to-ceiling glass so you can see the views to the ocean at all times. A similar style of architecture gives the nearby clubhouse a sense of class. Lounging around the pool sipping a cold white wine after a round of golf and lunch would be an enticing way to spend the afternoon.

Designed by the American architect Arthur Hills the Oitavos Dunes course (18 holes, par 71, 6303 m) has a linksy feel, but plays through both mature woodlands, more open areas, and coastal dunes. It takes you through some majestic umbrella pines, but the highlight of the round is on the back nine when the views out over the Atlantic Ocean are soothing to the soul.

There’s a tee for everyone. The red tees (4488m) are set quite far forward compared to the yellows (5605m) and blues (5180m). From the back, it’s a whole different matter: 5967m from the club tees and 6372m from the championship tees. Some of the holes are bordered by areas where it’s highly feasible you will lose your ball if you stray in. On a few of them it seems like you’re teeing off from long and narrow wooded chute that opens up further ahead, with various types of rough and hazards to traverse, with adjoining forest, thick foliage or knotty heather. Unless you are both long and straight off the tee, make sure to choose your starting point with a healthy dose of trepidation.

The strongest holes start with the 11th, a drivable par four with an approach area that narrows but feeds toward the heavily sloped green. The 13th is a long par five that rises at the end, where the green is framed by the trees and the ocean views to left are distractingly nice. Following are two memorable par threes, especially the 14th – with its demanding tee shot, especially if windy, over a nature reserve area (no looking for your balls here). From the 14th green you have some of the best views of the ocean and the Sintra mountains.

Golf Magazine has Oitavos Dunes in the top 100 best courses in the world and the second best in Continental Europe. It is a very nice course. But that ranking seems a bit out of whack. All in all, this is a beautiful and testing course – and one that I would definitely love to play again.

Lisbon Sports Club was founded in 1922, with its roots in a cricket club for British ex-pats, which started in 1873. After a complex history involving multiple location switches and golf courses of only six holes (one of them featuring sand and oil greens), Hawtree & Sons were brought in from England to design the current course. It opened in 1963 with nine holes. It soon gained some more holes here and there, and the club seemed to settle on 14 holes as quite enough for their little course. It was long thought of as ‘the world’s best 14-hole course’. But finally, in 1992 the course was expanded to a full 18 holes. The clubhouse still has the historic colonial style, a real treat to experience, with various old trophies and plaques exhibited in glass cases throughout the building.

The course provides a sheltered get-away from it all – there is almost no real estate adjoining the property. Lisbon Sports Club has an aura of quiet sophistication.

The course is short, at 5309m, par 69. Even though it runs through similar landscape for the entire track, each hole is quite distinct and memorable. We played it in a non-conventional order due to a sponsor event where several groups of beginners were learning golf. In order to avoid the worst crash with them, we walked directly down to the 6th tee not too far from the clubhouse, and used the adjacent empty 5th green as a practice putting area, becoming intimately acquainted with its slopes. The balls rolled very nicely.

The course is pleasantly and sometimes a tad quirkily laid out through a wooded area with lots of shade to escape to on hot days. There are six unique par threes on the course (including the 1st hole) and most of them are quite testing.

The approach shot on the par five 16th hole might cause a high pulse rate and rapid breathing. It seems one is sending the ball from a narrow and steeply declining fairway into an abyss of rough in a ravine far below. In our case the abyss won. Only one of four ended up with a ball in play on the green on the 16th. All other golf balls had gone AWOL, with their depressed owners walking dejectedly to the next tee.

By the time we made the ‘turn’ and started playing the course’s first holes, we were in much better spirits (despite some more lost balls on the narrow, slice-eating 18th hole).

We realized that the course in fact has quite a nice and gentle start to it. All in all, this was our favorite of the two Cascais courses we played.

We hope to come back to this enticing part of the world sooner rather than later, in order to get our fill of the golf courses of the Portuguese Riviera.