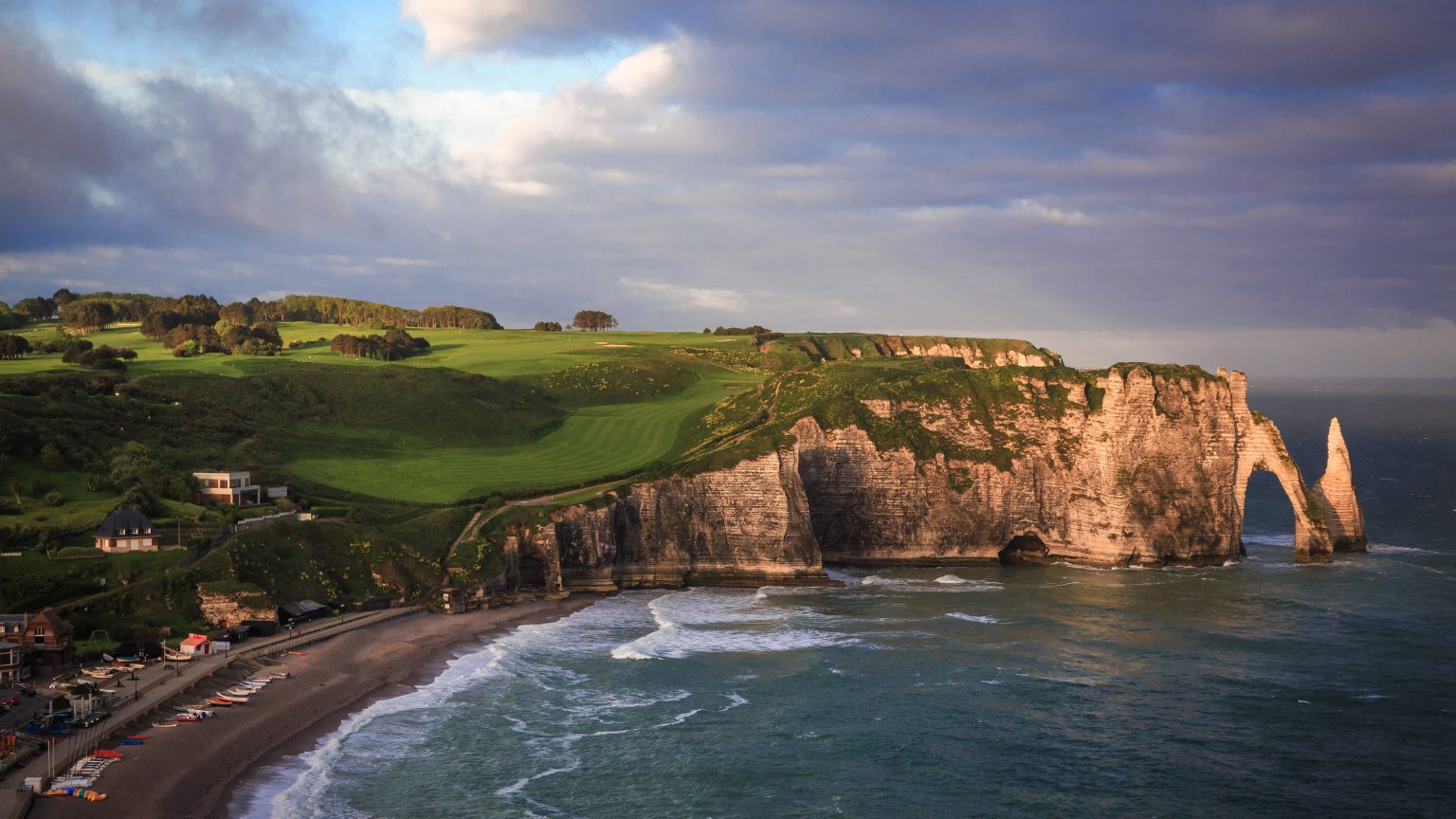 Stepping up to the 10th tee at Golf d’Etretat in Normandy, the world is laid out at our feet: the chalk cliffs, the Needle Rock, the town of Etretat, the English Channel. The beauty is breathtaking. May our drives be equally so.

The cliffs of Etretat seemed to be missing something vital for the hundreds of thousands of years of their pre-golf existence. It’s true, impressionist painters did come to Etretat in droves in the 19th century to document the cliffs in broad, perfunctory strokes. But at some level, they must have felt frustrated. Certainly, the landscape would not, could not, have stirred up the aesthetically induced emotions of onlookers (golfers) today. Luckily, the lackluster state of clifftop golflessness was remedied. That occurred in 1908 when a chap called Arnaud Massy (France’s only winner of the Open Championship) helped lay out a track on the top of the cliffs above the town. Visiting golfers to Etretat have been gobsmacked ever since – the course is one of the most beautiful in France.

Normandy golf courses have been the playing ground of visitors from the British Isles for more than 100 years. The scenic west coast of France is only a hop, skip and a jump over the Channel from Dover. But now that the world is a smaller place, and golfers are more discerning, the golf courses of Normandy are starting to attract more people from all over the world. They head to courses such as Etretat, Barrière Deauville and Omaha Beach.

Normandy is the perfect place for a full-fledged golf and culture bonanza, full of culinary peak experiences, gorgeous views, and a trove of history – including Omaha Beach, D-Day memorials and if you go even further back, the early medieval Bayeux Tapestry depicting the Norman conquest of England in 1066, a tapestry that’s slightly wider than it is tall, at 50 centimetres by 70 meters. Of course, the Normandy Golf Pass (normandiegolfpass.com) and its deal for three of nine different courses might interest you more than history and tapestries ever will.

It only takes 2.5 hours to drive from the centre of Paris to the Normandy coast at Golf d’Etretat, near Le Havre (a ferry from Portsmouth lands at Le Havre). When you arrive, you will feel the tension in your shoulders ease, and when you mosey over to the clubhouse and step inside, taking in the panoramic views to the clifftops, you will be wowed. If you aren’t wowed, you don’t care a smidgeon for beautiful golf courses.

Etretat is best known in general in France for its chalk cliffs, including three dramatic natural arches, and has attracted painters such as Gustave Courbet and Claude Monet.

The golf round is like playing inside a painting, but with a bit more wind to deal with than is usual on canvas. That wind – so forceful at times on the clifftops – can wreak havoc with your score. But don’t let anything as minor as scoring decrease in any way your enjoyment of the amazing surroundings.

Of course the holes with the best views, closest to the cliffs, are the most dramatic. The first three holes start you off in parkland surroundings, but you get your first full view of la Manche (the English Channel from the French side) by the green of the 4th hole.

The back nine is stunning, starting with the famous par five 10th (stroke index 1) – one of the most difficult uphill holes you will face, considering the wind. The public footpath with a steady stream of non-helmeted walkers trekking up to Porte d’Aval seems like just a powerful slice away from the tee.

I was impressed when president of Golf d’Etretat, Philippe Baillehache, said he had managed a bogey 6 on the hole on the same day we played, with wind against making our eyes water (it was an emphatic ‘cross’ on my scorecard).

His favorite spots on the course are the approach of the 4th hole to the cliffside green, the tee shot on the 8th, and the second shot on the famous 10th.

“This golf course is not very difficult when there is no wind,” he says.

The club has a laid back and low key feel. That may change when plans for a grand new clubhouse come to fruition within a few years from now.

Undoubtedly, the fact that the course was purchased by the town of Etretat in 1958 has meant that it is not as well known as it would be if a private owner were in charge of marketing it to the golfing world as a ‘bucket list’ candidate.

Since the hotels in Etretat tend to fill up quickly, many golfers prefer to stay at the nearby historic seaside resort town, Deauville. Luckily, there is a good base: Golf Barrière de Deauville. This resort on Mont Canisy offers one of the top tracks in France, a course opened in 1929 and designed by the renowned Tom Simpson. There is also a 9-hole course from 1964, designed by Henri Cotton.

Start off on the terrace with the local specialty, ‘café Calva’ – an espresso infused with the Norman drink of choice: Calvados apple spirit. This will negate the need to loosen up on the driving range.

Interestingly, there is not a single water hazard on the course – but there are plenty of tricky holes, all in undulating parkland that will bring a sense of peace to most golfers, unless of course you let yourself get easily aggravated when one of the towering oaks deflects your sliced drive the wrong way. Most of the greens are well protected by bunkers. Golf Barrière Deauville is a very enjoyable, classic course, not too long at 5951 meters and par 71.

If you want to treat yourself to some seaside elegance, stay at the Royal Barrière Deauville. For dinner, dress up for the stroll over to the famous grand Casino next door (remember to bring your passport as ID) and survey the proceedings from the tables at Le Cercle restaurant. There’s definitely a ‘Casino Royale’ feel to the evening, especially when you order your martini shaken, not stirred.

From the posh Deauville we head back into time. Omaha Beach is a site that invites solemn reflection, as it was here that so many lives were lost on D-Day, June 6, 1944. Our guide for the day, Jacques Ravelli, is one of the world’s most knowledgeable people on D-Day history. We visit the Normandy American Cemetery, with its 9,387 graves, and the D-Day museum at Arromanches.

Jacques is both an excellent wartime history guide, an author, and also a passionate golfer. His home club is the 36-hole resort Omaha Beach Golf Club at Port-en-Bessin, where each hole on the sea course, La Mer (designed by Yves Bureau) is named after a World War II hero, starting with General Dwight D. Eisenhower and continuing with Sir Winston Churchill and General Charles de Gaulle.

The most famous hole on La Mer is the 6th, where there is a wartime bunker just beyond the green, and a view of the D-Day artificial port at Arromanches and the artillery bunkers at Longues-sur-Mer. From the panoramic sea views of the 6th hole, La Mer then takes us back inland to undulating countryside.

The Norman weather of our day at Omaha Beach is memorable: blue skies and chirping birds interrupted every 45 minutes or so by the swift winds bringing on a short but heavy shower. Too bad there is not enough time to try the Manoir course, which looks very tempting.

The evening is spent at one of the area’s most exceptional hotels – Château La Chenevière (lacheneviere.fr), right next door to the golf course in Port-en-Bessin.

It’s listed in the renowned ‘Small Luxury Hotels of the World’ – and for good reason. The 18th Century chateau and the surrounding grounds are majestic (including a heated pool), the rooms are grand and the restaurant serves sumptuous dishes such as their specialty starter Le sot l’y laisse. Don’t forget to order from the impressive trolley of local cheeses – you won’t be disappointed.

During dinner we are captivated by the many wartime stories of our guide, Jacques.

He was just a 6-year-old boy on D-Day, but remembers the terrifying sounds and sights on the night of the allied invasion that he could hear from his home in Bayeux.

“From my bedroom window I could see the sky turn orange, red and yellow. Then there were the most terrible sounds. I ran and hid in my parents’ bed,” says Ravelli.

His town was the only one that came through those days unscathed, since the German occupiers fled from Bayeux with no resistance.

The following days brought scenes that he will never forget: German prisoners of war brought at gunpoint through the streets, some so young that they seemed to disappear in their giant overcoats. Jacques’ mother offered them water.

On the 7th of June, a British soldier gave Jacques a lime candy – due to wartime rationing it was the first candy he had ever tasted.

“Still today, when I taste lime, it brings back the memory,” he says.

On the last night of our visit to Normandy, we are reminded of how intense even some small experiences of life can be, and how our memories shape us. We are sure we will be back.