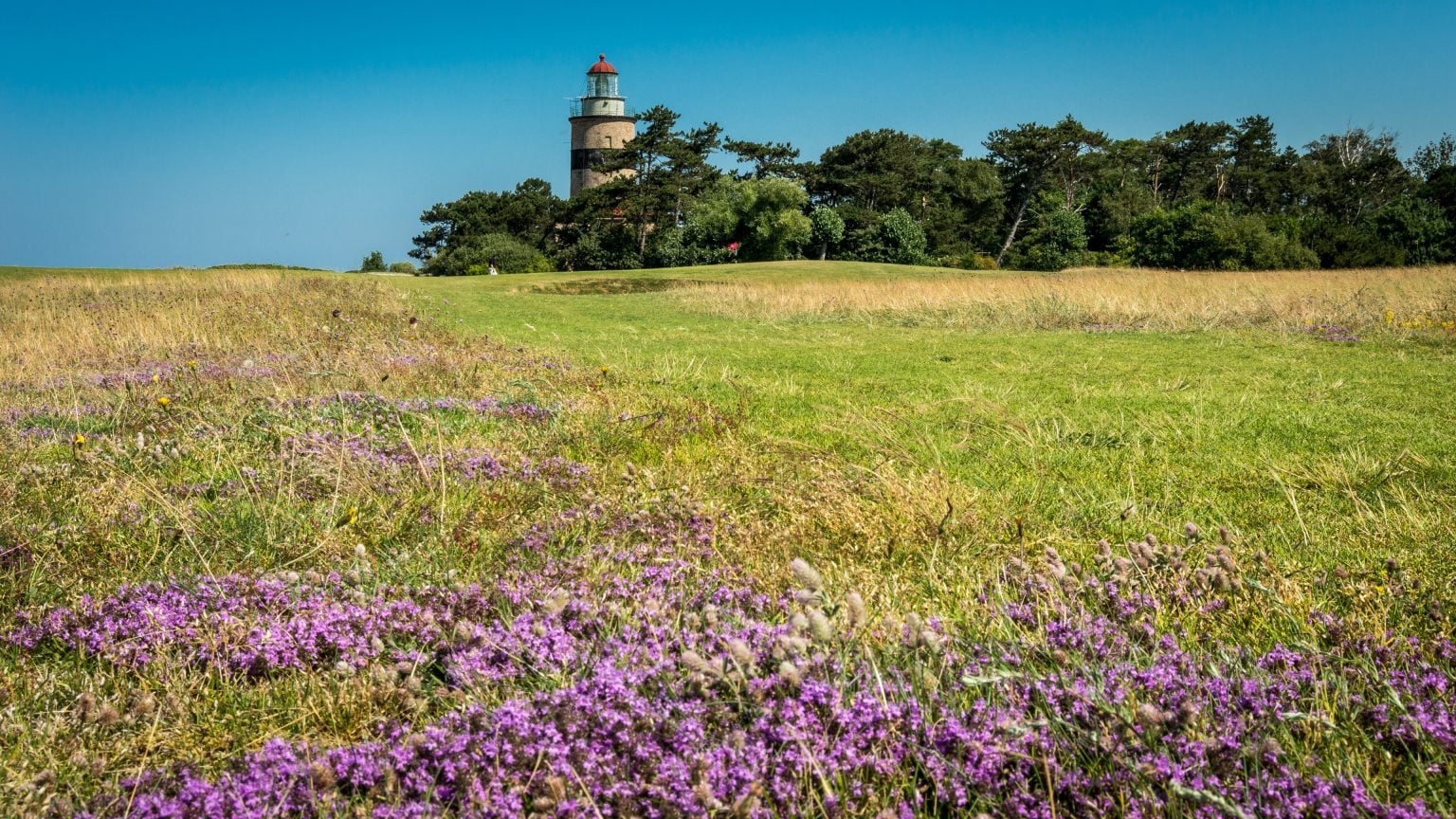 Quickly: When you think of Sweden, what comes first to mind? Was it IKEA, or maybe Volvo? Or did you think of the fjords? Or maybe even the Alps?

If your answer was the fjords, you’re a bit off the mark, the fjords are in Norway. And if you were thinking about Alps and watches, you are probably not a hockey fan – Sweden played Switzerland in the ice hockey world championship finals a couple of years ago, and many people realized for the very first time that they are actually two different countries (the Alps are in Switzerland).

So while Volvo and IKEA are two reasonable answers (see footnote), Sweden has a lot more to offer, especially to golfers. There are almost 500 golf courses in Sweden, from Björkliden, well north of the Arctic Circle, to Falsterbo in the south, not far from Copenhagen. Needless to say, the climate varies a lot, and golf courses up north have quite a short season (but with midnight sun) while many of the courses in the south stay open all year. And it is to this latter region that we traveled for this article.

Most courses in the north are forest courses, and the further south you go the more parkland courses you’ll find. But you won’t find any true links courses until you reach the very southern tip of Sweden, in the county of Skåne, just across the sound from Denmark. In fact, there are only four true links courses in Sweden: Viken, Falsterbo, Flommen and Ljunghusen. We visited all four.

If you drive up to Sweden from the European continent, you have to cross water somewhere. The very shortest ferry crossing is from Helsingör in Denmark to Helsingborg in Sweden, a short 20-minute ride. And just north of Helsingborg is Helsingborg Golf Club, also known as Viken.

Viken is a, by Swedish standards, a very old club. Golf was played here as early as 1898, but it was in 1924 that the course really started to take shape under the direction of William Hester. The current clubhouse was built in 1934, and is largely unchanged except for the loss of the full service restaurant.

The course is rather short, but it retains the genuine charm of an old-style links course. You really feel the winds of history both in the clubhouse and on the course. The course has nine holes (par 34) that are played twice for an 18-hole game. The layout is done like many older courses, with shared fairways (holes 1 and 3), greens in landing areas (1st green from the 3rd tee, 8th green from 5th tee, 4thgreen from 9th tee), which means that players will have to pay attention and that you will often meet other players and have time for a short chat, just like in old, less stressful times. Not only will you meet other players, but you will also meet people on the way to the beach on the walkways crossing the course here and there. All in all, this is probably the least modernized course in Sweden, with everything pretty much as it was in the 1930s.

The difficulties you will encounter playing Viken include deep bunkers, and with some narrow holes, lots of opportunities to go out of bounds, with the prevailing wind “helping” you. The course also has punishing heather in the rough, leading to many unexpected lies. On the other hand, the course is relatively short.

So should you play at Viken? It really depends on what type of golfer you are. If you appreciate golf as it used to be in the olden days, you shouldn’t miss it. And if you are a nature lover who enjoys wonderful views, this is the place for you. If, on the other hand you want target golf on modern, soft fairways, look elsewhere.

Next up on our Swedish links tour was Ljunghusen Golf Club, located south of Malmö on the southern coast of Sweden, about 30 minutes from the bridge connecting Sweden to Denmark and Copenhagen.

Ljunghusen started in 1936 and has since grown to 27 holes. Most often the holes are played in order, with holes 1-18 as an 18-hole round, but the three nine-hole loops can be played in any order to provide “endless” variation. After each loop, you come back to the clubhouse. The course has for the last 50 years consistently ranked in the top 10 in Sweden.

The course is next to the water, and is pretty flat. This does not mean that it’s uninteresting or unchallenging. It has plenty of small bumps to take into consideration when you plan your shots, and a consistent, sometimes strong wind always makes shots interesting. On days with strong wind, you even have to take the wind into account when putting, since the greens are consistently fast. At times when the course is dry you can get 100m of roll, whereas after a few days of rain your drive may bounce backward.

The first half of the course is more of a heathland course than links, but the ending holes on the first 18 are true links, as is the third nine-hole loop. If you like links golf, don’t leave after 18 holes. Have lunch in the clubhouse and continue on the last nine. A nice feature is that the last nine holes are played first come first served, so you need no reservation.

There are many nice holes, but a few deserve special mention. Number 17 is maybe the signature hole, where you have at wide view of the southern Baltic from the tee. A short 280m par four, it may sound easy, but with water hazards on both sides of the fairway, and a two-level green, that is not so.

The recently restored 18th hole has two possible lines of play. One follows the water and the other more conservative way is inland. A beautiful finishing hole to the first 18.

Hole 21 is also special. A par three, 180 often downwind meters from the yellow tees, it plays to a sunken green. This hole is part of the original nine holes from 1936, and back then there was no irrigation, so the surface of the green was simply lowered to get closer to the groundwater level. Holes 19-27 offer a nice insight into how courses were built in the past, when you had to take nature into account much more than on some more modern courses.

The clubhouse is from the 1960s, built in a cubist style. On the first floor, you’ll find the reception and a well-stocked pro shop. The restaurant is on the second floor, with a magnificent view of the entire course. Also magnificent is the home-style hamburger. Don’t miss it if you’re into hamburgers.

For our last Swedish links experience, we went to the very southern tip of Sweden. There you find two courses, Falsterbo GC and Flommen GC. The courses are right next to each other, Falsterbo at the southern tip, and Flommen just north of it. They are so close together that you could play a few holes at Falsterbo, and the just continue north on Flommen, something that has led to Flommen sometimes being referred to as “Falsterbo north course”.

Falsterbo is one of the oldest golf clubs in Sweden, founded in 1909. The first course was a nine-hole course, west of the famous lighthouse. In 1930 the current 18-hole course was designed by Dr. Gunnar Bauer. He adapted the course to the natural surroundings in the nature reserve and bird sanctuary, following the ever-shifting terrain, and constructed a magnificent links course.

The course was redesigned by Peter Nordwall in the 1990s. The original layout was maintained, but many tees and bunkers were changed. Maybe the biggest change was the introduction of modern, undulating green areas, making them more interesting and challenging. The redesigned course was opened in 2002.

The course is a true links course, with heavy rough and large rolling fairways and greens. Maybe a bit unusual for a links course is that there are also quite a few water hazards, which are either inlets from Öresund (the sound that separates Sweden from Denmark) or natural ponds that are part of the wetland. The wetland is also popular with migrating birds, which means that at some times of the year you have to be on the lookout for birdwatchers before you hit you tee shots.

Falsterbo is very steep in tradition, and is very much a member’s club, although guests are of course welcome. Just make sure to call ahead, since it can be hard to get a tee time in the summer. One thing that you will notice is that there are no signs directing you to the next hole. Signs are just considered a distraction from the beautiful natural landscape, so you’d better study the map carefully. Seriously, it is not that hard to find the next hole if you just pay attention. And if you get lost, you can always refer to the charming Falsterbo lighthouse, always in view.

“Falsterbo north”, or Flommen, is a very similar course, although there is even more water in play. Between holes, you often have to walk on long, narrow bridges over the water. The abundance of water has also made the course a bit greener, and you don’t find quite as much of the typical links rough. Maybe this is the reason it has not made it into the “246 links courses of the world” bible.

Flommen is also a bit less pretentious than Falsterbo. In fact, the club was founded in 1935 by caddies from Falsterbo. After caddying for a few seasons for the summer guests at Falsterbo, the caddies started to understand the game and wanted to play. The local municipality granted them the right to play on the fields north of Falsterbo GC, and that’s how the club got started. You’ll see that the clubhouse is simpler, but still quite nice, and it is easier to get a tee time than at Falsterbo. But the course is just as worthwhile to play as is Falsterbo. If you have the energy, you can play both Falsterbo and Flommen in the same day, as we did. A long but very rewarding day.

After your round, or rounds, don’t miss the fishing village in Skanör, just north of the two courses. Here you can take a stroll on the piers and admire beautiful sailing ships from all over the world, and also find several very nice restaurants. Fish is naturally a local specialty.

There are many ways to reach southern Sweden. If you come by air, you have two airports to choose from. The closest airport is Malmö-Sturup, served by several low cost airlines, including Ryanair. If you arrive on a long-haul flight, Copenhagen is your best bet. It is connected to Sweden by bridge, and you can be on the courses in Sweden in about an hour.

Coming by car from Europe, you can go by ferry from Germany or Poland. Your closest harbor will be Trelleborg, but all the southern entry points are within an hour of the courses.

Only a few courses in Sweden offer hotels, but many will have RV hookups and some feature self-service cottages to rent.

*While IKEA and Volvo were both founded in Sweden and market themselves as Swedish companies, IKEA is now headquartered in the Netherlands, and Volvo is owned by the Chinese company Geely. Meatballs are still Swedish, though…..no, wait, they came to Sweden from the Ottoman Empire. Sigh.