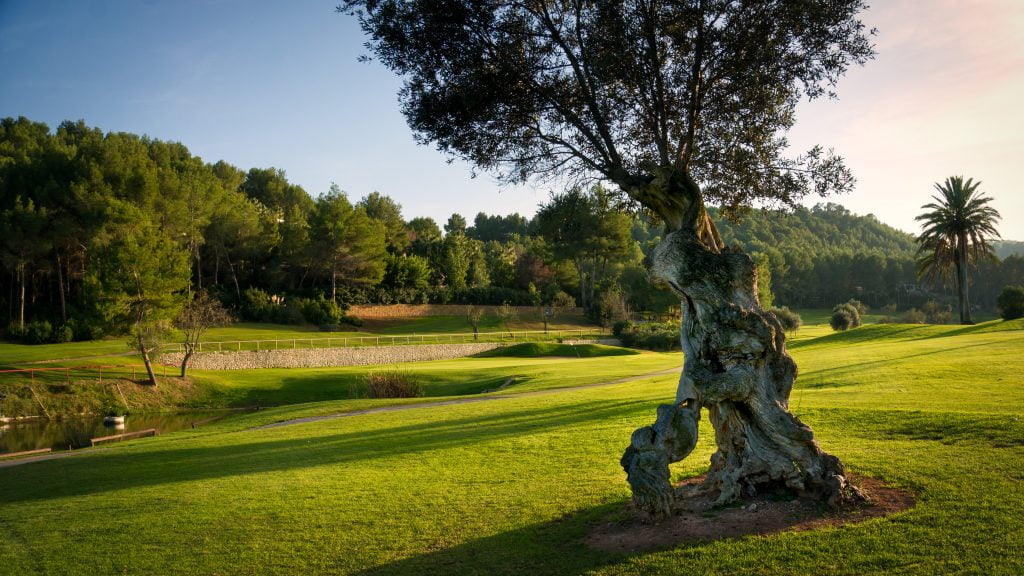 Each of the three 18-hole courses at Arabella Golf has its own clubhouse, including the brand new one at Son Vida, but it is hard to talk about Arabella without mentioning the two hotels, Sheraton Arabella and Castillo Son Vida. With the same owner for all three courses and the two hotels, services and packages are intimately linked. You can of course come up to Arabella and play a course as a greenfee guest, but, in all honesty, staying and getting pampered at one of the hotels, and playing all three courses is what makes the experience special.

Golf Son Vida is the oldest of the three courses, it is in fact the oldest of all the courses in Mallorca, opened in 1964. First to play the course was Prince Rainer of Monaco, followed by many famous names, not the least of which was Seve Ballesteros.

The second course to be added was Son Muntaner, which opened in 2001. Son Muntaner is a modern championship layout, not for the faint of heart.

The most recent course is Son Quint, opened in 2007. Son Quint is a bit of a mix, with some of the holes in Son Vida style, and some more like Son Muntaner. Overall, this is the friendliest and easiest of the three.

The driving range and most of the practice areas are located at the Son Muntaner course. You can ride on the shuttle to get there, or simply take your golf cart.

There are two hotels next to the golf courses. Both hotels are part of a free golf shuttle loop that connects the hotels and the three courses.

Sheraton Arabella is a modern five star hotel, located just behind the 18th green at Son Vida Golf. The hotel was completely renovated in 2013, and now has everything you can ask for including several fine restaurants and a full-service spa. The rooms are well appointed, and, notable these days, everything works just as you expect it to. Too many hotel renovations these days result in beautiful rooms, but with solutions that require a Ph.D for simple actions like turning off the lights or adjusting the shower temperature. Not so at Arabella, here everything just works. A very nice hotel indeed.

Castillo Son Vida was, in spite of the name, never a castle, but the property has a long and vivid history, going all the way back to the 13th century. However, in the mid-20th century, it was converted into hotel. In 2006 it was completely renovated into the 5+ star experience it is today. Castillo Son Vida still retains the castle feeling, with high ceilings and magnificent paintings by Mallorca’s most famous artists. Sitting on the outdoor terrace overlooking the city of Palma, you can imagine yourself being the king of the castle, looking out over your estate, watching the farmers golfers toiling below.

Son Vida is a course from another era, but still great fun to play. It’s by far the shortest and narrowest of the three courses, with generally smaller green areas.

The course was designed by Hawtree and opened in 1964 as a nine hole course. Over the years it was expanded to 18 holes, and in 2001 it was updated by Rossknecht at the same time as he worked on Son Muntaner. Most of the updating was technical (irrigation, hazards), but the 13th and 18th were more drastically changed.

The course is almost like two courses in one. The first twelve holes are played in  a Mediterranean forest landscape, with narrow fairway corridors, mostly tree-lined, but sometimes by houses. With many of the holes being fairly short, it is easy to think that you can almost reach the green if you only hit a slight draw, or manage that fade, but more often than not that type of thinking results in a lost ball. If you play strategically and mostly leave your driver in the bag you’ll do better in the long run.

This is especially true on the narrow downhill par five 6th hole. It can be reached with three iron shots. A driver off the tee means a lost ball many times. Number six used to be the opening hole in the original layout, so I imagine many golfers were frustrated even before leaving the first tee.

Notable on the first nine is the par three 8th holes, short and with the green far below the tee. What a view, and what a chance for an ace.

The second nine starts out with even narrower fairway corridors than the first, but it all changes when you reach hole 13. Now the course opens up, and you can see all the remaining holes, the clubhouse, and the Sheraton Arabella. The forest is no longer a big factor, but now water comes into play on a few of the remaining holes. This is especially true on the 18th, with water down the left for your tee shot, and water to your right for you second and approach shots. Unless the last two shots are one and the same. If so you are either really good or really foolish.

After finishing up, you can enjoy lunch or a beer on the new (2016) clubhouse terrace, overlooking the 18th green. If your friends are behind you, you can take pleasure in that it is them, not you, struggling on the tough finishing hole. 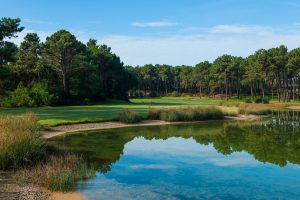 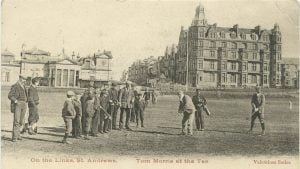