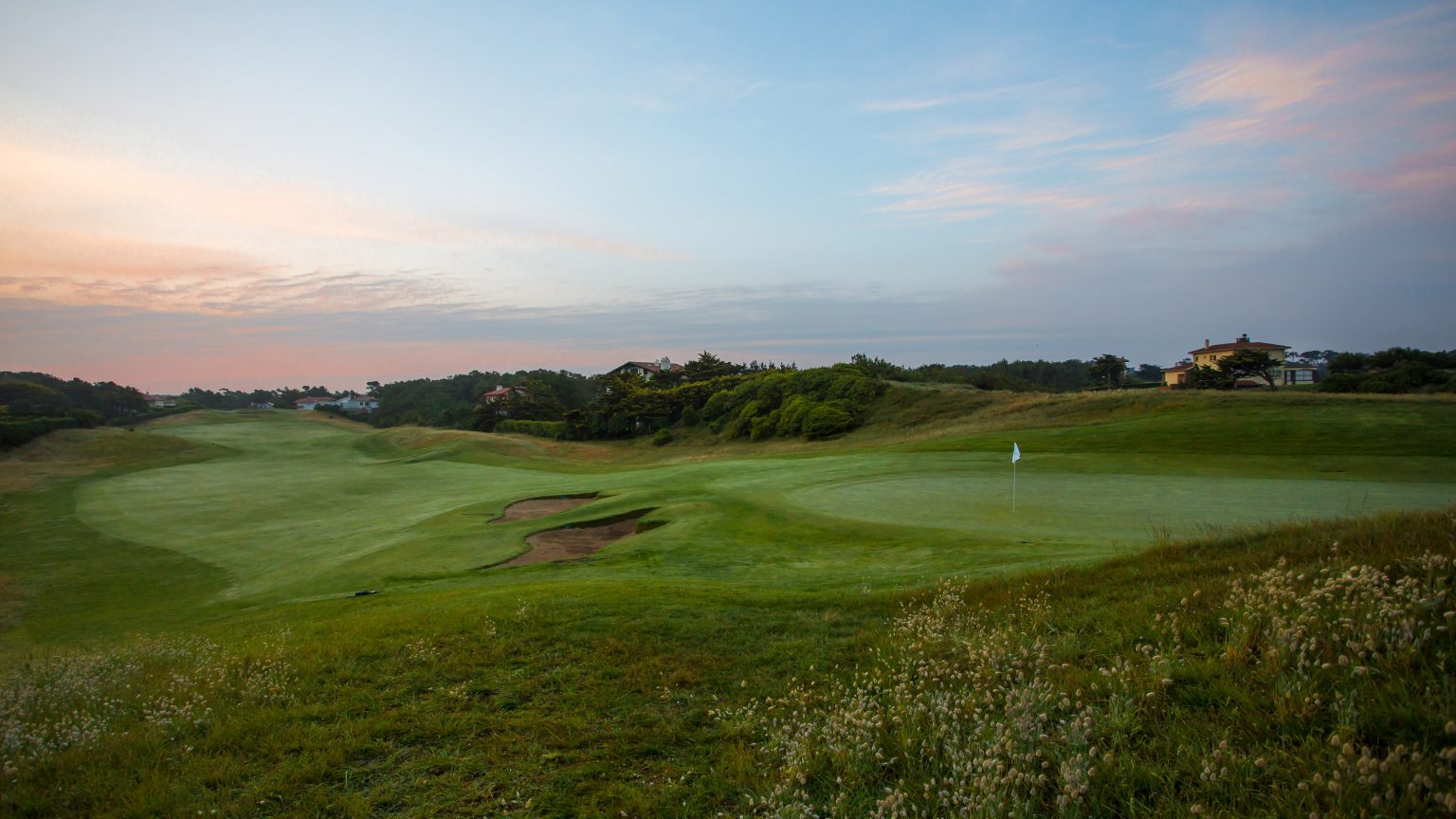 Life should be like this. Sitting on a terrace with a view of the glittering Bay of Biscay, with a local Basque Pagoa beer in one hand and reaching for a “pintxo” (Basque tapas) with the other.

Maybe later we’ll take a dip in the infinity pool at La Reserve while we watch the sun set over the surfers on the beach of Saint-Jean-de-Luz.

If you’ve never been to the French Basque country and Biarritz, you may not realize what you’ve been missing. It’s not just about beautiful scenery, surfers and schmoozing with glitterati.

Everything about the Basque culture is fascinating, starting with the fact that their language is not known to be related to any other language. The theory is that it’s a leftover of the languages spoken before the Indo-Europeans invaded the area about 5000 years ago. There are now almost 3 million people living in the Basque region, an area that spans the French-Spanish border on the Atlantic coast. The population is largest on the Spanish side, País Vasco y Navarra, with more than 2.5 million people. The French Basque country, Pays Basque, is home to the rest.

Basque cuisine is known to have inspired some of the world’s great chefs, and a reason unto itself to visit the area. You won’t forget the Bayonne ham, the sheep’s cheese served with cherry jam, the Espelette pepper or the many exquisite desserts including gâteau Basque.

The British ‘discovered’ the French Basque country as a tempting getaway from the sometime cold and damp British climate ever since they fought in the Napoleonic wars there in 1813-1814.

Golf, not war, is what brought me here – and the opportunity to play classic courses designed by renowned British golf architects such as Willie Dunn, Tom Simpson and Harry Colt. There’s loads of golf history to be found nearby. The oldest continuously played golf course outside of Scotland is not, as one might think, elsewhere in Britain. It is further inland at Pau, also in Pyrénées-Atlantiques. It was built in 1856 as nine holes and laid out as 18 holes in 1860 by Dunn.

My Basque trip started in Anglet, a stone’s throw north of Biarritz. I could hear the hypnotic sound of the waves on the beach from our spa hotel, Les Terrasses d’Atlanthal (biarritz-thalasso.com). Golf de Chiberta is within walking distance from the hotel. Chiberta was designed in 1927 by Tom Simpson, famous for other designs in France such as Chantilly Le Vineuil and Morfontaine.

Chiberta starts off in parkland style with a gentle par five down the hill and to a green with a majestic looking 19th century estate behind it. But immediately the course changes style, because after we cross the road toward the sea, there is a series of holes that are the closest thing to a classic links course that you can play in France, and the conditioning supports that feel. The 3rd hole runs parallel to the beach, as do the 5th, the 12th and the 13th. You only wish you could see the ocean a bit better when you walk along the hole, as the dunes shelter the course.

Walking the course, it seems like it constantly changes character, from parkland to links and back again. We cross the road four times during the round, and we see new features around each corner. The parkland holes have fairways lined with mature pines, and the Lac de Chiberta comes into play on the 9th hole. All in all, this is a fun and scenic course, not too long at 5647m from the back tees, and par 70.

The next courses to play are Golf d’Arcangues and Golf de Biarritz Le Phare, two very different experiences. Arcangues, a 20-minute drive from the center of Biarritz, is a modern course, par 72 of 6106m, designed by American Ronald Fream in the 1990s, and set in rolling, water-laced terrain with a restored 15th century farmhouse converted into a clubhouse. The club is renowned for its lunch, served on the terrace, where you can take in an unmatched view, including people teeing off on both the 1st and the 10th tees.

I was happy to play Golf d’Arcangues with local B&B owner (etchebri.fr) Brigitte Wallon, previously Brigitte Van de Velde – who says she became interested in improving at golf years after she and Jean (‘almost’ winner of The Open 1999) went their separate ways. She now plays off hcp 5, has a keen eye for analyzing swings, and has many patrons to her Anglet B&B who come back on an annual basis.

Golf de Biarritz, twinned with Augusta National in Georgia, puts the ‘ritz’ in Biarritz. When you enter the wrought iron gates and see the statue of the 1907 first and only French winner of The Open Championship, Arnaud Massy, you realize that this club has some history. Willie Dunn designed the course, which opened in 1888, and was later reworked by Harry Colt. It is one of the oldest courses in continental Europe, symbolizing golf history in the Basque country.

The fairways and greens of Le Phare course are lush and well-maintained and heighten the sense of respect with which you play it. Legends such as José Maria Olazabal and Nick Faldo have played as young amateurs here in the annual Biarritz Cup. Olazabal won, Faldo did not. He reportedly hooked a nine iron into a bush on the short par three 12th in the final round.

The club is located right above the city center, and as you walk down the 4th fairway you see the city laid out below. This is another course that is not too long, at 5402m, par 69. Some of the greens have quite limited acreage, so accuracy is of the utmost importance.

Le Phare, like Chiberta, has some unconventional routing. You play the first three holes near the clubhouse before a longish walk past the club’s entrance to the 4th tee. After a loop on the slopes there consisting of six holes, you walk back again past the clubhouse to tee off for the final nine. After the round, you will get another taste of fantastic Basque cuisine in the clubhouse. Or for an exquisite meal try the restaurant at the Sofitel Biarritz Le Miramar in town, with unmatched views of la Grande Plage and the lighthouse.

Our last stop was the beautiful and historic town of St-Jean-de-Luz. From our vantage point at Hotel La Reserve and its infinity pool, we had stunning views. Our final dinner was at Olatua restaurant and pintxo bar, a true culinary experience based on local ingredients including some of the best seafood you can possibly hope to find.

The only remaining course, perhaps the most well known of all them: Golf de Chantaco, owned and run by the legendary Lacoste family, and designed by Harry Colt in 1928. The club is a must on the itinerary of anyone interested in sports history.

In the clubhouse, there are historical photos on every wall, the largest of which covers an entire wall, and features a photo of the young Simone Thion de la Chaume, a French amateur golfer who was the first foreign player to win the British Girls Amateur in 1924, and who won the British Ladies Amateur in 1927. She ended up marrying U.S. Open tennis champion René Lacoste in 1929. She was the founder of Golf de Chantaco, bringing Arnaud Massy in as the first professional. Their daughter Catherine Lacoste won the U.S. Women’s Open in 1967, the only amateur ever to do so.

The current president of Chantaco is Véronique Smondack, daughter of Catherine, and also a keen golfer, having learned to play growing up at Chantaco.

Chantaco, she says, is perfect for the best women golfers and for all amateurs. It doesn’t have the length for a professional tournament for men (5833m, par 70), but for everyone else it provides plenty of challenges. Every year it plays host to the Lacoste Ladies Open de France.

The course is hilly, with some narrow landing areas, demanding concentration for the full round. When you play the 17th you will see the mountain La Rhune in the distance behind the green. According to Basque legend La Rhune is the home of the first serpent, Erensuge.

I will have to pay a visit to Erensuge on La Rhune the next time I visit, when I intend to explore the Basque mountains.