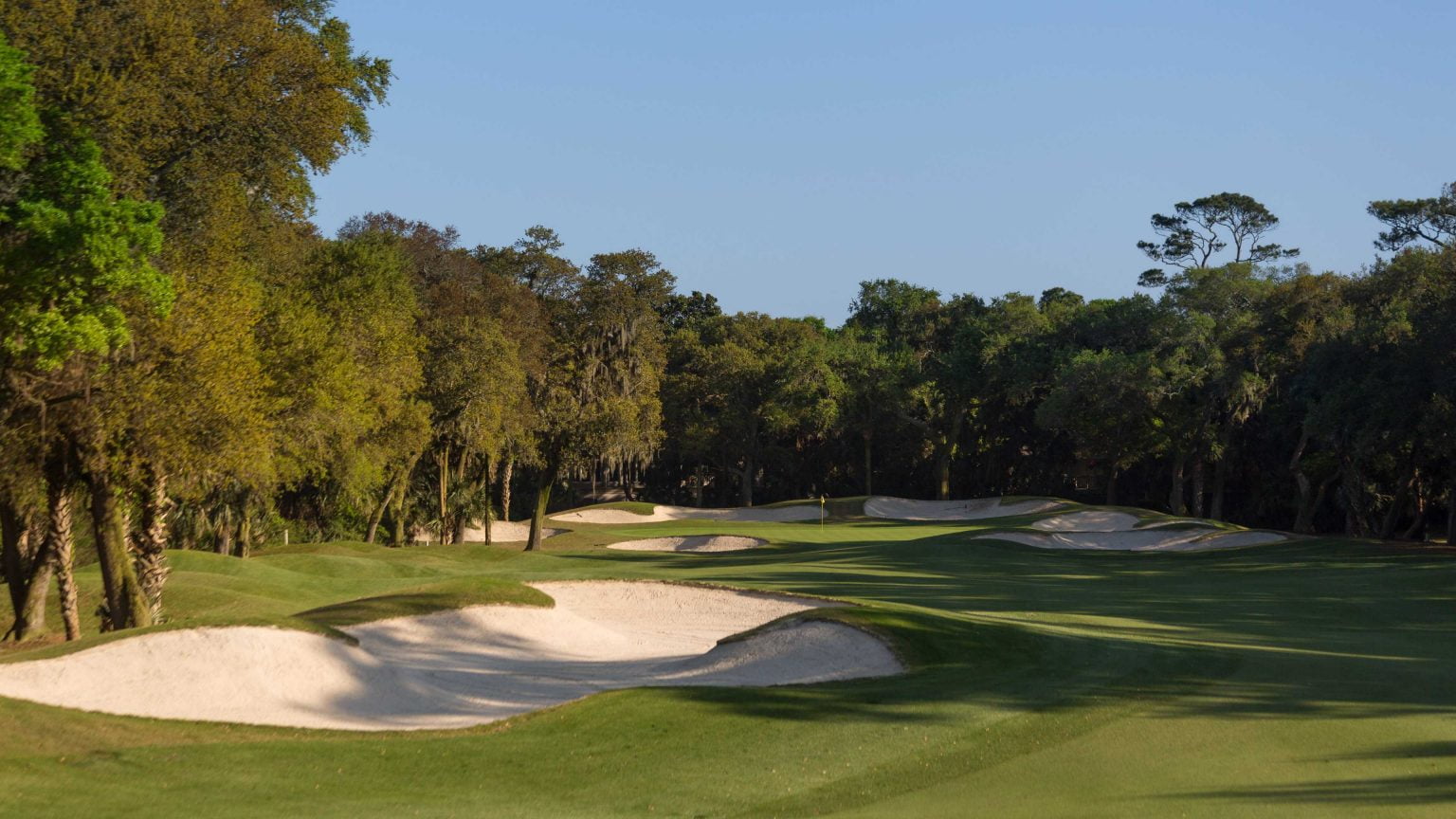 “Have fun. You will have lots of birdies,” was the message from Gary Player on Twitter when we told him we were heading to his classic design on Kiawah Island: Cougar Point.

On the winding road from Charleston out to Kiawah Island on South Carolina’s Atlantic seaboard, I feel like I’m entering a secret forest. Peering out from under the canopy of sugar maples, river birches and southern magnolias, I see a shimmering sunlit green on my right. It’s what I’ve come here to play.

The par three 2nd hole of Cougar Point looks friendly and inviting, with the green tucked closed to a lake.

Although the Ocean Course is the headliner at Kiawah, Cougar Point is the course that gets most people returning for a second round. In fact, many locals have it as their favorite course to play regularly, despite featuring the smallest and least practical clubhouse on the island. Why?

We went to Kiawah Island to find out.

But first, a little history. Cougar Point, depending on your view, can be thought of as either the oldest course on Kiawah Island or the youngest.

In 1976 it saw the light of day as ‘Marsh Point’ – intended as a par 62 executive course, to be designed by Player as the very first golf course on the island. Goal: to get people to come to Kiawah – and of course if people were interested in buying the adjacent properties, they wouldn’t be discouraged. But the owners didn’t really agree with themselves on the strategy, and midway in the construction of the course they asked Player to stretch the layout so it would be a par 72 course. He obliged but was never happy with the results.

So Marsh Point remained a bit of a juggernaut for golfers through the 1980’s. It was a short course, but that didn’t make it easy. There were steep runoffs into the water hazards, small and exaggeratedly undulated greens, and it seemed all the fairways repelled the victims’ balls into hazards and out of bounds. They were perhaps ‘un-fairways.’ The course wasn’t just difficult, it was maddeningly difficult.

In 1996, the powers that be finally realized that something had to be done. Gary Player was asked to come back and set things right, and to do it properly. And with a budget of $3.4 million and a plot of Kiawah land only surpassed by the Ocean Course in beautiful scenery along the tidal marshes, he relished the opportunity.

Since the re-opening and renaming in 1997, Cougar Point has gained steadily more acclaim – even in competition with the other great courses on the island: the Ocean Course (Pete Dye) where the Ryder Cup was held in 1991 and the PGA Championship in 2012, Osprey Point (Tom Fazio), Turtle Point (Jack Nicklaus) and Oak Point (Clyde Johnston).

Today’s Cougar Point has larger, more receptive and less undulated greens. It’s longer than it was, at 6875 yards from the tips, and with five sets of tees to choose from. It’s also a lot of fun, and will force you to use your brain every now and again.

If you like to feel the turf under your feet, it’s good to know that buggies are not mandatory. In fact, golfers are encouraged to walk (but you’ll have to carry your bag, pull-carts/trolleys aren’t allowed). Maybe health nut Gary Player has had a say in the matter.

Between shots, you’ll be soothed by the peaceful surroundings, especially the stunning views of marshland along the 4th to 6th holes. The 5th hole is an especially tricky little number – you must put your drive on the right side of the fairway to avoid having some trees in your way on the approach to the green, one that plays like an island green, jutting out into the marshland, built up with railway sleepers.

Aim for pin, at your peril

The most devilish flag placement on the 5th hole is when it’s set closest to the river (as I asked for it to be placed when I was taking pictures of the course – good for photos, too bad for the various golfers I saw pass me by in the morning, none of whom played it safe, and all of whom bounced off the green and into the reeds).

The 6th hole is a tranquil par three, with the wide open space of the marshland creating a natural setting.

On the 7th we start heading back into the parkland. Be aware of the ‘friendly’ 6-foot alligator usually lazing around in the lake by the green. ‘Friendly’ might be a bit of an exaggeration – don’t try to do research into the matter.

The back nine brings more water into play. On the 10th, there’s a lake all along the right side of the hole, but the fairway is forgiving if you play it safe.

The 12th is a picturesque par three, surrounded by water on three sides, with a little bridge taking you on to the next hole. Player probably expects us all to get birdies here – alas.

The last four holes need some gumption. The 15th is a challenging par five with water left and right. The 18th is another risk/reward hole – the risk is ending up in the drink on your approach.

Of all of the holes, the 11th is the most famous. The par five of 496 yards from the back has some gorgeous bunkering and some majestic oaks by the green. It was the filming location of the opening scene from the classic golf movie ‘The Legend of Bagger Vance’ – directed by Robert Redford and starring Matt Damon, Will Smith and Charlize Theron. The scene depicts Jack Lemmon teeing off, walking toward the woods to find his tee shot and then having a heart attack.

It’s not as depressing as it sounds – if you’re going to kick the bucket, you may as well do it while chasing birdies on one of the nicest and most pleasurable courses on the Atlantic seaboard. But once you’re on the course, you’re bound to want to keep fit so you can play it as many times as possible before your time is up. Keep walking.