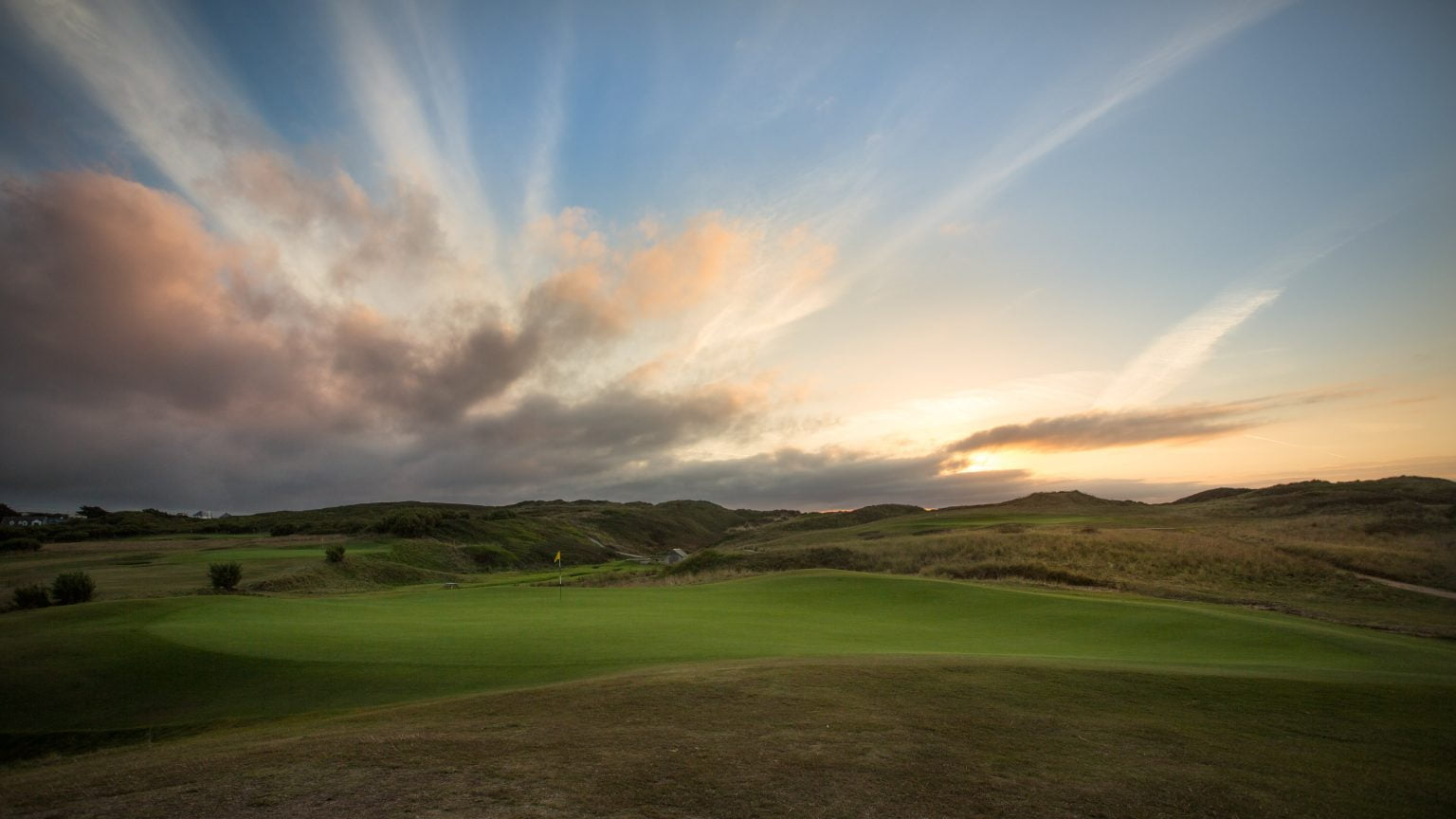 How do the links courses of southwest England compare to those of Scotland and Ireland? If you’re used to ordering haggis or black pudding after your round on the links, maybe you should consider heading south and enjoying a Cornish pasty instead. Golf in Cornwall should be on your bucket list.

This is England. But it’s not the England that most golfers have experienced, at least not ‘overseas’ golfers.

We have a tendency to follow the leader. Scotland? Check. Ireland? Check. Then we do England, which in many cases just means the ‘home counties’ around London. If we’re a bit adventurous we might even head up to Liverpool and the north. But there’s a Gallic corner of England where fairways should be equally enjoyed, where bunkers should be frequented (and triumphantly escaped), and where the friendly clubhouses should be familiar to many more Americans, Canadians, Europeans and golfers from across the world.

Cornwall has its own unique culture and climate – with historical ties to the people of both Brittany, across the Channel in France, and Wales. Cornwall means ‘people of the horn’ – as Cornwall is shaped as a horn. The Cornish people have their own revived Celtic language, Kernewek Kemmyn, although it’s not a living language like Scottish Gaelic and Irish.

This corner of the UK features some of the country’s most spectacularly beautiful scenery, and its top golf courses compete with Britannia’s best. The travel is far from a huge logistical challenge – the drive from Heathrow Airport outside of London to the North Cornwall coast and Padstow, the charming seaside town near the golf courses we played, is about four hours.

Further south you will find the idyllic fishing village of St Ives, including some stunning beaches. Even further south are Penzance and Land’s End. No wonder the British have loved to vacation in Cornwall since the invention of the modern seaside holiday.

Our Cornish links adventure – one part of a full ‘Atlantic Links’ itinerary including top courses in Somerset and Devon – started at St Enodoc’s Church Course (par 69, 6299 yards), designed by James Braid in 1907. The course is partly set in natural seaside dunes, with views over the Camel Estuary. It is one of two courses at St Enodoc, the other being the Holywell Course. Ahead of the round, we noted that the Church Course was listed as Top 100 in the World by Golf Digest magazine in 2014, sneaking in at 99. Both Golf World and Golf Monthly rank it in the top 40 of Great Britain and Ireland.

So it’s with high expectations that we stand on the first tee and look over the gently sloping fairways down toward the sea. This won’t be the first time we ‘ooh’ and ‘ah’ over the impeccable views.

The first holes are classic links. After a gentle start with a par five where you have to negotiate the dunes, the course starts showing teeth, albeit quite lovely teeth. The 2nd is a long par four, and the 3rd is a very narrow downhill dogleg left with a blind tee shot. We soon find that the greens are fast, true and tricky. The variety of the holes is evident, even after just the first few holes, which include the 5th, a wonderful par three. This hole was actually added by Tom Simpson years after the original design was laid.

The 6th hole is famous, or perhaps infamous: ‘The Himalayas’. This hole is definitely the most memorable of the entire Atlantic Links trip – there is no way that the impression of that gargantuan bunker, obliterating any chance of a view of the green for the approach shot, will ever fade in my memory. Foolishly, I tried to go over with my rescue, but I just couldn’t get the shot high enough and I got caught up in the mouth of the Yeti. It was with heavy heart I climbed up the 80-foot dune, like a mountain goat, to try to extricate my ball. I never did make it to the green.

The 10th hole, The Church, is for good reason rated at slope index 1. It is probably one of the most difficult par fours you will ever face. Please don’t be too nonchalant on the tee – driver is maybe not the best choice. If you do hit driver, it needs to be straight on the money, or better. There is a steep and tangly dune to the right and a devious lateral water hazard to the left, not visible from the tee. The landing area narrows toward the ‘joint’ of the dogleg. I would guess most people would be happy to score a five on this hole (as the course guide suggests).

The 11th and 12th holes, set below the ancient stone church that was restored in the Victorian era, are pleasant. The weakest holes of the layout are the holes above the church, 13 and 14, where the fairway has a pronounced left-right tilt – those holes seem to be designed as transport holes out of necessity.

At the 15th hole we get back on track, with this long downhill par three with the green right behind a paved road, equaling the personality and creativity of the first holes. By the time the adventurous golfer makes the ascent up the 18th fairway, the first tee is already egging you on to try this layout again.

All in all, St Enodoc’s Church Course has heaps of character. If you have an open mind and a sense of adventure and playfulness, you will love this course and embrace its sometime quirky and unique holes – including some blind shots. Take a few sleeves of golf balls and if your drive misses the fairway, hit a provisional. This course puts a premium on accuracy, with narrow fairways, small greens and rough that can at times be brutal. Just stay calm and remember that you won’t score well on your first try.

You don’t have to play well to love it. Englishman and local resident John Betjeman was known as a mediocre golfer, but a great poet. His funeral procession in May 1984 traversed the signature 10th hole in driving, torrential rain (he probably would have thought this was funny, as he was known for his humor). He was buried in the churchyard after which the course is named. Here is the final verse of his poem ‘Seaside Golf’:

We head on to Trevose Golf & Country Club’s onsite accommodation, great if you want to get close to the coast and to the course. We feel like we’re on a true nature expedition – from the holiday rental bungalows we can walk to the shore of Constantine Bay, following the course routing in the dusk, with nobody else in sight. We look over to the rugged Trevose Head. The excitement builds for the next day.

We’re teeing off on Trevose’s Championship Course (par 71, 7079 yards) so early on a Thursday morning that the breakfast staff have to rush out with vittles for us so we can down them in the few minutes available before we sprint out to the 1st tee. In the mornings at Trevose it’s all two-balls and alternate shot foursomes.

This course was designed by legendary Harry Colt, and opened in 1925. There are four sets of tees to choose from. The layout looks gorgeous on a mild and sunny, breezy autumn morning. The first holes are visually stunning, heading out to the frothing sea.

The first thing we notice as we’re finishing up on the gentle downhill par four 1st hole is the pace of play. As we’re taking a few photos of the green after a quick two-putt, the couple behind is already standing in the fairway ready to play.

The par three 3rd hole is a beauty. It’s 173 yards from the back, 148 from the yellows and 142 from the reds. With a stream in front, out-of-bounds to the left, a sloping green and three deep and scary bunkers short and right, you might feel your muscles tighten as you take your stance. Remember, no matter the punishment, this is loads better than a day at the office.

The green of the par five 4th hole provides the most exquisite beauty spot on the course, perched out on the cliffs with the Atlantic Ocean as a backdrop. As we’re temporarily immobilized, waiting for the two-ball ahead to clear the 5th fairway, we take some more photos of the 4th green, and we see that the couple behind us are getting impatient. We have played the first four holes in 45-50 minutes. Obviously, Trevosers like to play quickly!

We head back inland, traversing scrunched fairways where it’s tough to get a flat lie. The greens beckon, but it’s not always easy to heed their call. Luckily, the rough is pretty much kept short, again to help the pace of play. Bunkers are heavenly-looking but devilish, framed by long grasses and rough edges.

The roll on these Cornish greens, like at St Enodoc, is fast and true. After the 10th hole the group ahead has been asked to pick up the tempo, and in fact we play the last eight holes in under an hour, walking briskly uphill on the very demanding par four 18th hole, with its green on top of the hill in front of the clubhouse. We are exhilarated by the experience.

After our leisurely start, this brings our total round, including some photography and also some waiting on the first nine, to 3 hours and 15 minutes. We are told afterwards that that’s about what is expected in the mornings at Trevose.

All in all, Trevose is exceptionally beautiful, though only one green is right on the coastline. The coast is in view from most of the holes. Harry Colt has made an enticing layout, and with changing directions of the holes, you can never get used to a particular wind direction. The winds will change from one day to the next, so it never plays the same. Sign us up for next year! Keep those Cornish pasties hot.