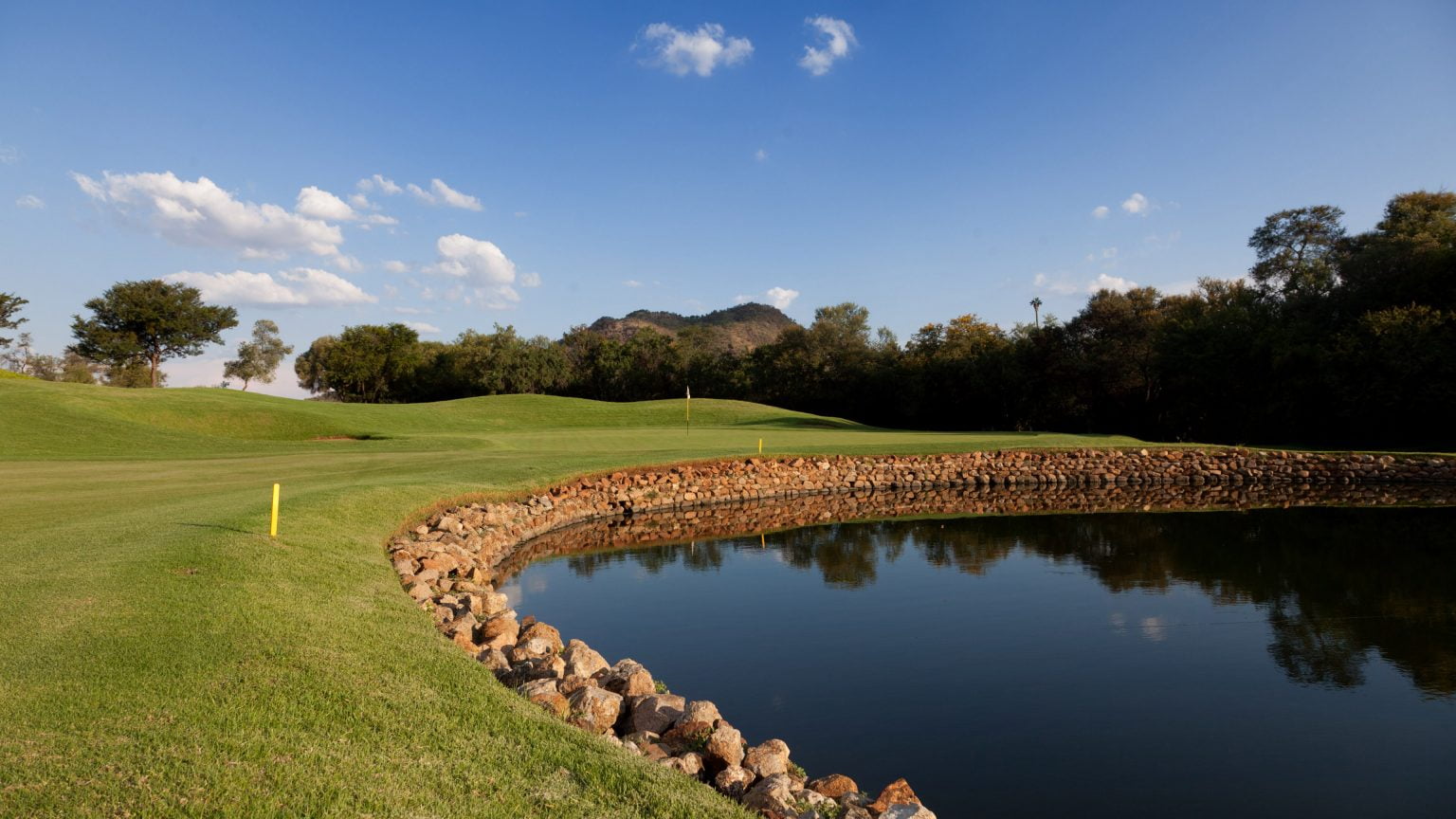 The ‘legend’ of The Lost City is that before the dawn of western civilization a tribe from northern Africa brought their mighty architecture to a volcanic crater called the Valley of the Sun. Then an earthquake ruined the city and forced the people to flee. Today – the fantasy has it – it has been restored to its former glory as The Lost City at Sun City, South Africa.

This strange story displaces the other only slightly less colorful story, namely that in 1979 South African hotel magnate Sol Kerzner and his Sun International company built a Las Vegas-style entertainment complex in Bophuthatswana, two hours’ drive north of Johannesburg, in the homeland of the Tswana. In those days of continued apartheid policies in South Africa, the only way they could build a resort catering to southern Africans of all ethnicities was to place it in an independent homeland. They brought in Grand Slam golfer Gary Player, the Black Knight, to design the two golf courses.

Since 1981, the continent’s richest tournament has taken place every year at the Gary Player Country Club in Sun City. The Nedbank Challenge – originally called the ‘Million Dollar Challenge’ – kicked off with Seve Ballesteros, Jack Nicklaus, Lee Trevino, Johnny Miller, and Player battling for what was at the time a sensational prize fund. Since then the event has played host to the world’s top players: even Tiger was in the field in the early part of his career.

Today the Gary Player course is still ranked as one of the very top in South Africa. It is also touted as one of the most challenging courses on the continent, measuring 7162 meters from the tips. We went to Sun City to see what the fuss is all about.

There are four hotels at Sun City, and – according to the brochures, there are 101 things to do. They probably aren’t exaggerating. What with touring the luxurious Palace of the Lost City Hotel, wildlife safaris in Pilanesberg National Park, surfing in the Valley of Waves, gambling, dining, dancing, playing tennis and squash, swimming, going to shows and getting your weekly reflexology session done at the spa, you might not even have time to play golf.

That would really be too bad, because both courses are top quality, and they are different from each other.

The Lost City course is a par-72 desert-style course surrounded by shrubby and thorny ‘bushveld’ landscape and with frequent use of barren waste bunkers.

Its clubhouse looks like something the Pueblo tribe in the Southwestern United States could have created in pre-colonial times, built up from giant boulders. In front of the clubhouse and its Crocodile Lounge is a lake, and the 9th and the 18th greens jut into it, from either side.

One of the main joys of playing the Sun City courses is the varied wildlife. You’ll probably see warthogs, impala, guinea fowl, mongoose and monkeys, to mention just a few. In fact, the baboons can be a bit of a nuisance, and guests at the Sun City Hotel are strictly warned to keep doors and windows into their rooms shut – otherwise they could attract some unwanted attention from their fellow primates, who think nothing of climbing the facade of the hotel to reach the terraces.

The Lost City course is designed for golfers of all abilities. The kikuyu grass fairways (in impeccable condition) are relatively wide. Many of the holes feature water hazards.

On the back nine, many of the tees are elevated, giving great views of the landscape. The signature hole is the par-three 13th, where the water hazard is a crocodile pit. Some of these Nile crocs are a good deal more than two meters long. Retrieve your ball at your own risk. On second thought: please don’t retrieve it!

The highlight of the trip is the round on the Gary Player course – where caddies are mandatory (no carts allowed). Part of the experience is the lunch at the halfway house after putting out on the island green of the 9th hole (your order is taken when you tee off on the first). It is a South African tradition to have a meal between the two nines – if you’re out early enough in the day, the halfway meal is a full breakfast.

Although the terrain is relatively flat on the Gary Player course, man-made water hazards, penalizing rough, shaped fairways and well-defended greens make each hole different and interesting. The Gary Player course seems more secluded and wild than the Lost City course, as the bushveld runs in natural ridges between the holes, creating a feeling that you’re in your own little golf-safari world.

The bent grass greens are challenging, so make use of the local knowledge of your caddie. One thing’s for sure, you’re unlikely to play on better greens anywhere in the world.

Although the course is 7162 meters from the back, there are four sets of tees, so choosing the right set for various levels shouldn’t be a problem. Again, the wildlife is a great part of the experience of playing here – and especially as the sun starts to set you’re likely to see more animals venturing out from the shade.

After two rounds at Sun City, I was sad to leave the courses, and a bit relieved not to have to spend much more time in the Vegas-like casinos – which are not really my thing. I could never really get into the suspension of disbelief regarding the fantasy of the Lost City. But maybe that’s just me. Who knows, perhaps the story really is true. Maybe those magnificent northern African tribes of ancient lore even played golf. If they did, they had two very good courses to test their mighty, pre-historic equipment upon. I wonder if they ate their lunches at the halfway house.