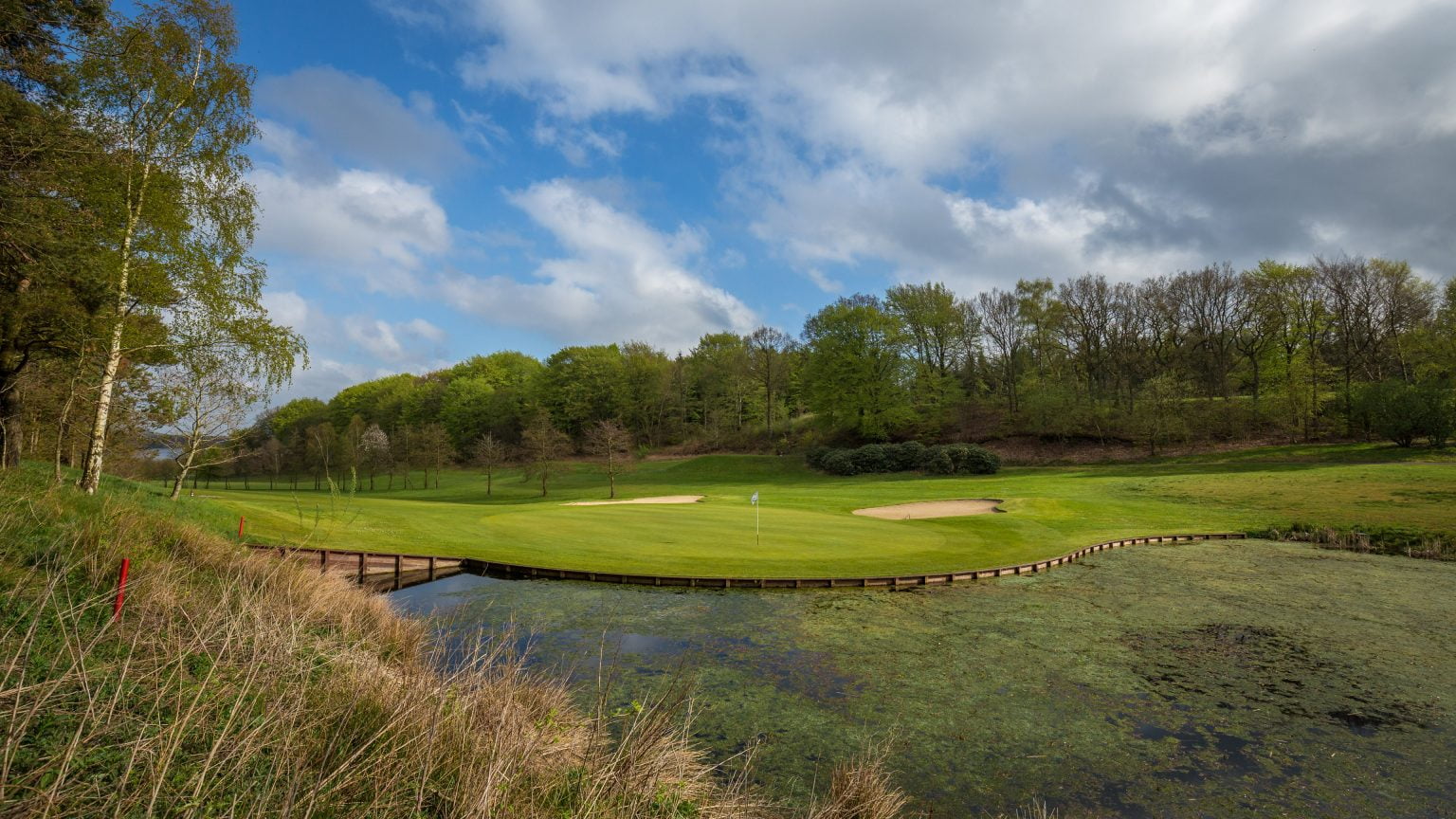 The heart of Denmark

Once upon a time, there was a very flat country that had lots of fun-loving people in it who also happened to make famous beers. Then one day somebody visited from a hilly country across the sea and showed these fun-loving people how to play a frustrating game with iron sticks and a white ball, which would sometimes roll into a tiny hole in the ground.

The flat-country people loved it, especially when they got to drink their specialty beers after each game! But on their flat land, this game soon became too repetitive. They needed more challenges. So they looked at their country up and down and side to side, and finally found the perfect gentle hills next to their longest river, named after one of their gods. There they built some terrific courses, and now they are all living happily ever after.

OK, that’s not the greatest fairy tale you’ve ever heard. It’s not up to the standards of Denmark’s most famous writer, Hans Christian Andersen, who wrote about ugly ducklings and mermaids, not about golfers. But this fairy tale is based on a true story. The region we’re talking about is Gudenaalandet, Hans Christian Andersen’s holiday destination for the summer of 1853. It’s the area surrounding the Guden River, between Tørring and Randers Fjord, in the heart of Denmark’s Jutland peninsula.

With undulating terrain and lots of big and small lakes, it’s a golfer’s dreamland. But not many outsiders have discovered it. Plenty of golfers come to Denmark, especially from neighbouring Sweden and Norway, but they tend to stop at destinations that are closer to their home borders. It’s worth it to go beyond the tried and true, drive an hour further into the country and see what central Jutland has to offer.

Our foray into Gudenaalandet’s golf took us to the area between Silkeborg and Skanderborg. We stayed at Knudhule Badehotel right by the Knudsø lake in Ry. It was recently taken over by the chef Anders Kalstrup, who offers local specialties, including the liquid kind.

We dined in historic surroundings, at the century-old Hotel Julsø Restaurant at the foot of Himmelbjerget, Denmark’s second tallest peak (147m above sea level). We sailed on the Guden River in a sun-powered electric boat that was as quiet as a birch-bark canoe. We happily consumed locally brewed beers and the finest foods of the region – learning why Danes are at the forefront of new global trends in gastronomy. But most of all, we played golf, averaging more than 36 holes per day!

The most well-known course in the area is in Silkeborg. Silkeborg is the hometown of Thomas Bjørn, one of the handful of Scandinavians who have come within a hair’s breadth of winning The Open Championship, at Royal St George’s in 2003. He was introduced to golf by his parents at the tender age of not yet one year – they would take him along in a baby carriage on rounds played at their home club of Silkeborg.

A few years ago Silkeborg and Ry golf clubs merged to become Silkeborg Ry. Not only does the club have the magnificent 27 holes at Silkeborg (three nines: East, West and South) it also has 27 holes 17 km down the road at Ry, consisting of a full length course and a 9-hole pay-and-play.

Silkeborg, set in mature woodland terrain, is one of Denmark’s and Scandinavia’s very best courses, and Bjørn himself has had a hand in the design of the newest nine holes.

The original design is from 1966, by Frederik Dreyer and Henrik J. Jacobsen. Most of those original holes are now part of the West and South loops – the new holes are mostly on the East loop. We played the classic West-South track, and loved it. From the tips it measures 6453m, but there are four sets of tees to choose from. You won’t be disappointed. The holes were enticing and fun, and the conditioning was immaculate.

For a completely different, yet equally inspiring day, visit Hammel Golf (par 72, 6020m from the back), lying about 30 minutes’ drive both from Silkeborg and from Denmark’s second city, Århus. What makes this club really great, are its people – the 1100 members are absolutely mad about golf and they’re also extremely friendly and easygoing (no fancy dress codes here). The course is relatively easy to walk, and the fairways are wide enough, and the greens big enough, that most people will leave Hammel with a smile on their faces. Still, it’s no pushover. There are some hilly holes, tricky doglegs, and a few water hazards – watch out for the 17th, where there’s a ‘hidden’ pond about 40m in front of the green. The relaxed atmosphere of the clubhouse is unique. Perhaps this is spurred on by various ingenious marketing campaigns, such as ‘Hammel’-labeled bottles of very drinkable red wine and bonus cards – 300 Danish krone for a dozen half liters of Carlsberg.

The highland of the seas

Another very friendly club is Søhøjlandet, 20 minutes’ drive from Silkeborg. Their clubhouse represents chic and modern Danish design, with windows from floor to ceiling, perfect for letting in the soft light of Scandinavian summer evenings. The mostly woodland par 72 course starts in open terrain but after the par four 4th it winds into the forest, and you have to really concentrate on the tee if you haven’t already. There are some picturesque and secluded holes before you come out again to reach the clubhouse after nine. The back nine is a bit longer than the front, but slightly less tricky. The round ends with two downhill par fives that are worthy of the course.

At Himmelbjerg Golf Club, right next to the famous ‘mountain’, you’ll find a fairly hilly course. It starts easy and open, but goes up into the woods, giving you some pretty tight tee shots at times, with trees on both sides. There are some fun par threes on the course, including the final hole, where a stream lies directly in front of the green in order to punish the duffers and other incompetents.

The club also has a 9-hole course, famous because its 7th tee is the highest tee in Denmark, at a whopping 122m above sea level. No oxygen mask is needed. Locals call the tee Blæsbjerg, which translates to ‘windy mountain’.

Next time we go to the center of Jutland, we will most certainly play other great courses. Two that we saw, but didn’t play, were Tange Sø and Skanderborg. The first is located next to a very beautiful reservoir, while the latter is on the shores of Skanderborg Sø.