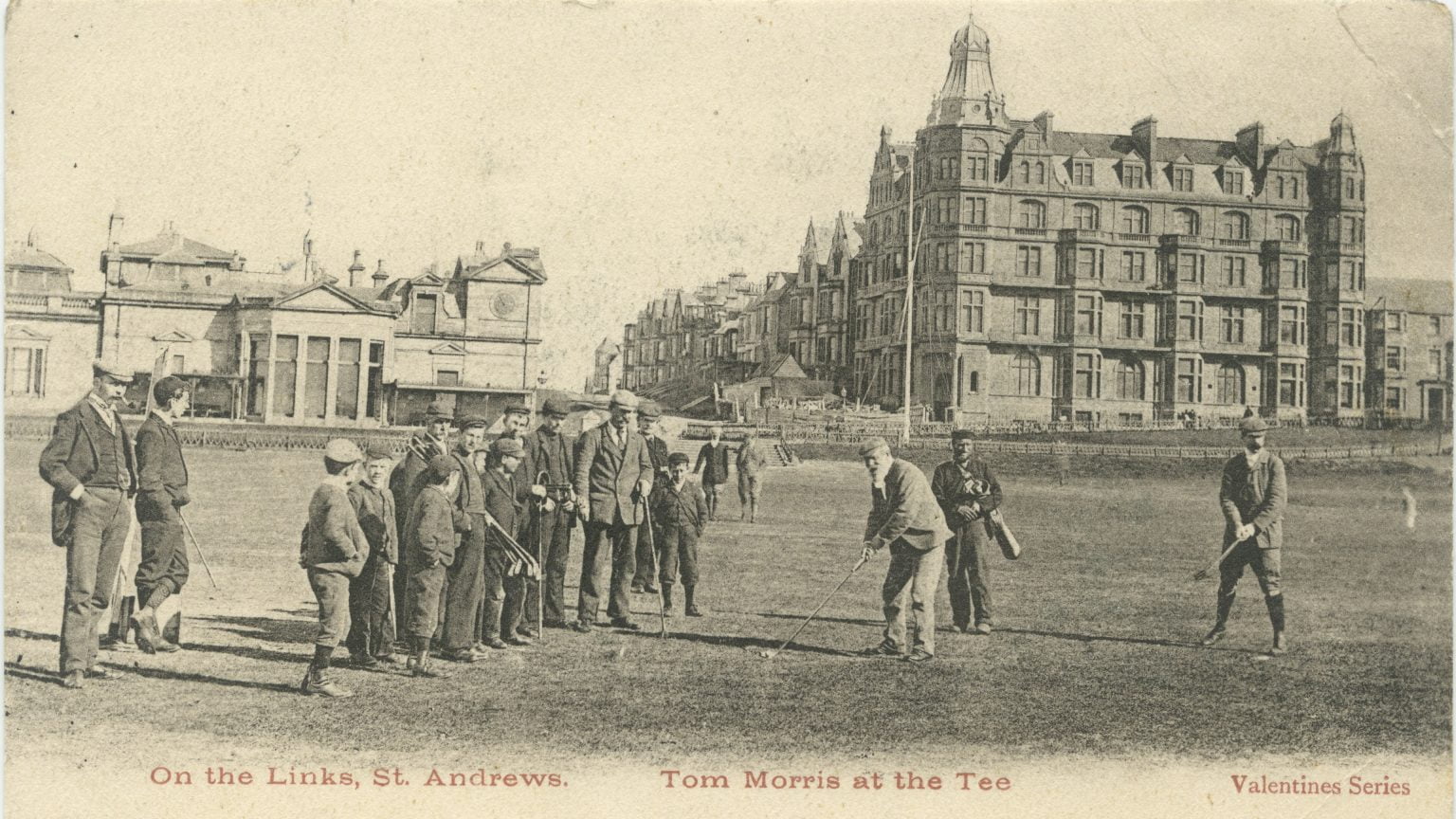 At the renowned Jigger Inn at the Home of Golf we met with the hottest golf historian on the planet: Roger McStravick, the Irishman of St Andrews. His book ‘St Andrews in the Footsteps of Old Tom Morris’ has made waves in golf publishing, winning heaps of praise for the depth of its research, the gripping storytelling and the jaw-dropping presentation of historical golf images that have never been seen before.

Having just received the US Golf Association’s 2016 Herbert Warren Wind book prize, which included a trip to Augusta for the Masters tournament, Roger McStravick is back in St Andrews to continue his life’s passion (or one of them): digging up new material on the legends of golf and recounting their stories.

In ‘St Andrews in the Footsteps of Old Tom Morris’ (available at thegolfbookshop.com) McStravick showcases the famous Scottish town that’s known as the Home of Golf – focusing on the streets, the buildings and the dramatic, touching and inspiring stories of the townspeople throughout history. Of course, there’s plenty of material on Old Tom Morris and his son, four-time Open winner Young Tom Morris, who died at the age of 24.

But it’s not really about Old Tom. It brings a whole menagerie of people to life, with lots of subplots  and mini-dramas: from Mary Queen of Scots (possibly the first woman addicted to golf) to golfing greats who ended up in poor houses and were finally tossed into unmarked graves. Some of the information is completely new, actually rewriting the history of golf – for example the new light shed upon the perhaps not-so-turbulent relationship between Old Tom and his mentor Allan Robertson, and the story of how and when the first green on the Old Course was created.

GTJ: Why hasn’t the world seen so many of these historic pictures before?

RM: St Andrews is fantastic, and the archives available here are phenomenal – at the R&A, the St Andrews Preservation Trust and the University of St Andrews. There’s just so much material, not only photographic archives, but also other materials, manuscripts, original receipts and old documents. I still think there’s loads to come out.

GTJ: So there will be a volume two?

RM: Possibly, one day. What I will probably do is focus on certain eras in the history of St Andrews, like the Rabbit Wars when they nearly lost the links to rabbits in the early 18th century. But my next book is going to be ‘The History of Golf’ – it will be in the same style as ‘Footsteps’ with lots of beautiful pictures.

GTJ: One of my favorite parts is explanation of all the names on the Old Course, of holes, bunkers, etc. Did that take a lot of research?

RM: It did – and finding the proper answers as well. There were lots of things that had been in print that weren’t true. One example was the bunker The Principal’s Nose. A lot of people said that the principal of the university had a really big nose. The truth is that he had a house on South Street with a porch that jutted out into the street. When Sir Hugh Lyon Playfair was cleaning up St Andrews he wanted wide boulevards and straight lines. So he basically cut off ‘the principal’s nose’ – the principal’s porch. So that’s where it came from. Victorian caddies had a brilliant skill for giving names. For example the bunkers on the 9th. Paul Kruger was a leader in the Boer War. So the bunkers on the 9th were ‘Kruger’ and ‘Kruger’s Wife’. But there was a tiny one as well, and that was called ‘Kruger’s Mistress.’ It was a Victorian way of having a go at Kruger. It’s like the Valley of Sin, such a great name. They had a really good sense of drama – which we don’t seem to have these days, or are afraid to use.

GTJ: You’ve been nominated for and have received so many prizes – most recently the nomination for Cross Sports Book of the Year for Best Illustrated Book. And of course you went to Augusta after having received the USGA Herbert Warren Wind award, named after one of the greatest golf writers of all time.

RM: Winning the USGA award has been amazing. The book’s now being developed into a movie, a mixed Canada and UK production. We’ve done a first script. It will be about St Andrews with various storylines running through it – Tom Morris and Allan Robertson being one of them. The idea is ‘Chariots of Fire’ for golf.

GTJ: Is your book for golf history geeks?

RM: You know, I don’t think it is. It definitely appeals to golf history geeks, but I wanted to make it accessible with interesting stories. One of the nicest compliments I’ve had is from Louise Topping, the owner of a bookshop in St Andrews, who said “I just wanted to sit and read it with a coffee. It’s so beautiful.” And she has no interest in golf whatsoever.

GTJ: HRH Prince Andrew read the manuscript before it was published and based on that, wrote the introduction to the book, which he said was ‘fascinating’. When the book was published it got universal acclaim from all sorts of critics and reviewers. You must have received so many compliments…

RM: Yes. One was from Peter Crabtree, who co-wrote ‘Tom Morris of St Andrews, The Colossus of Golf.’ He told me he was reading my book cover to cover, that he only had 10 pages left, and he was dreading finishing it. I’ve had emails from people all over the world.

GTJ: You’re Irish – are you accepted as a true local in St Andrews or are you an outsider?

RM: I think you have to have lived here for three generations.

GTJ: And you haven’t lived there for three generations yet?

RM: No. So I’m not a St Andrean. But this is the warmest, friendliest, most brilliant and supportive place. It’s amazing and I love it.

About The Jigger Inn

The Jigger Inn by the 17th hole at St Andrews Old Course is one of the most iconic alehouses in the world of golf. The building, recognizable in so many photos from Open Championships, dates back to the 1850s, when it was the stationmaster’s lodge. The railway station was torn down in the 1960s, and the Old Course Hotel was built on the site. The Old Course Hotel now owns and runs The Jigger Inn. Winners of the Open Championship in St Andrews are known to have thrown some memorable impromptu parties at the Jigger. The interior is full of both golfing memorabilia and of golfers enjoying a pint or two of Scottish beer.