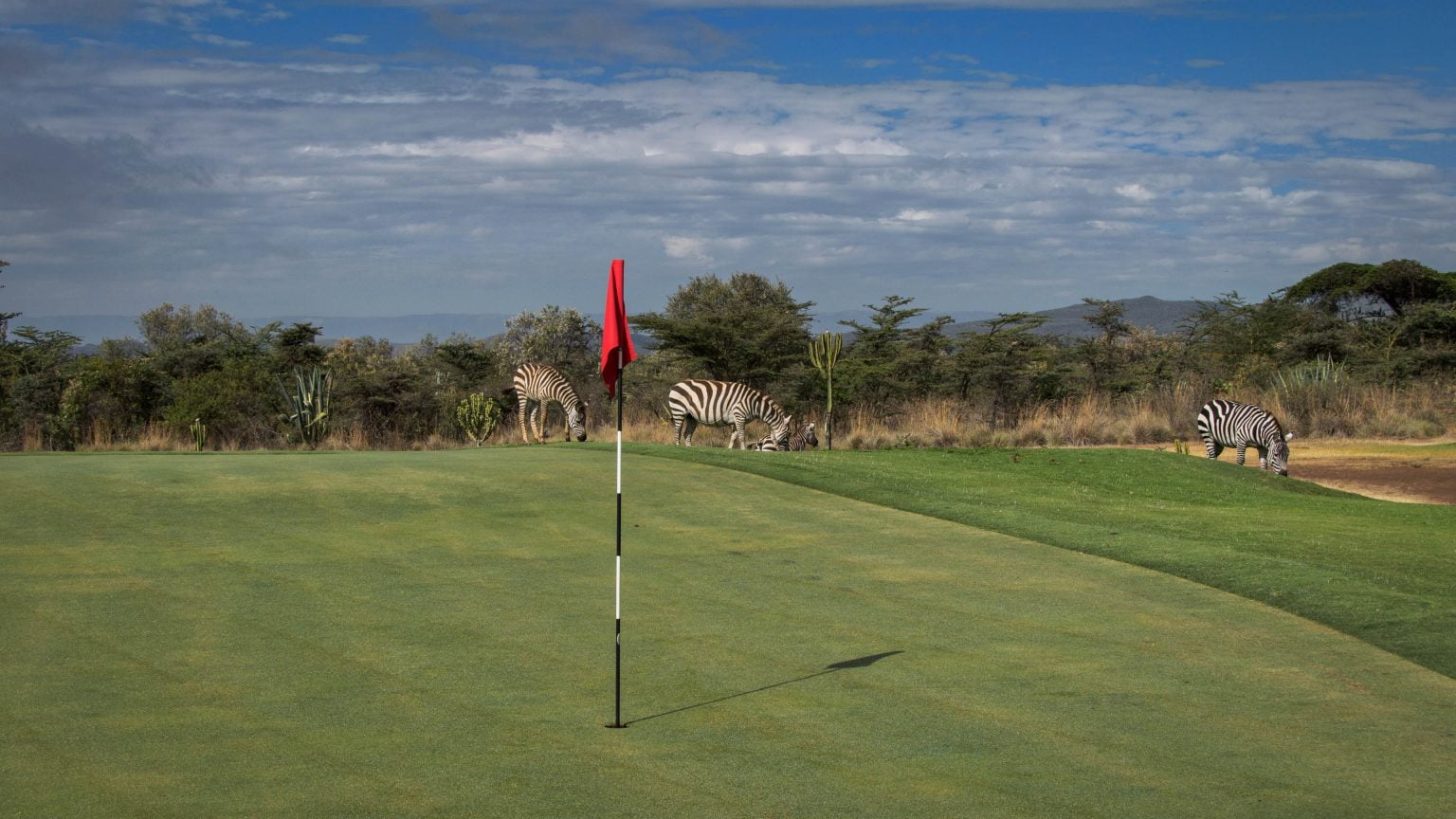 Walking with the animals – Golf in Kenya’s Rift Valley

“It’s just them again.” The zebras look bored. They’ve seen it all before. They ignore us as we putt out on the 3rd hole of the Great Rift Valley Golf Club.

The Rift Valley is the cradle of humanity. Here, 3 million years ago, Lucy wandered the plains. It’s not that farfetched to imagine that it may just be the cradle of golf, too. Life was good in the Valley back then. Humanity was making great strides. What would Lucy do with her afternoon, after she was done foraging for food, done putting the young ones down for a nap, done fighting off the neighboring tribe? Read a book? They weren’t invented yet. No, I think she finally had some time left over to play games with her friends. And what could be more fun than hitting at a rock with a stick? After all, they had just figured out how to use tools like sticks with rocks tied to them to fight off their enemies. And there was plenty of space for an impromptu course on the savannah. This would explain how utterly normal golf seems to be to the zebras and the antelopes. They’ve seen it all before.

Golfers are pretty much the same as they always were. What has improved over the eons is the quality of the golf courses. The Great Rift Valley Golf Club is a good example.

From a distance, you can’t really see the golf club at all. It blends in perfectly with the landscape. So does the lodge, nestled among the trees on the hillside.

The course itself is best described as a parkland course. The landscape is pretty flat, so most of the holes are pretty straightforward. Between the holes, and sometimes in play, are large acacia trees. If you stray too far off the fairway, you end up in the bush. But fairways are generally wide, so you can easily keep your ball in play on most holes.

After two straightforward par fours, you reach what may the best hole on the course, a short par three with a small pond to the left of the green. Apart from being a nice little hole, maybe the best part is the beautiful view of Lake Naivasha from the elevated tee. And it was here we had our first encounter with the zebras, lollygagging around the green like they owned the place.

The front nine finishes with a dogleg par four, with the approach well guarded by a large pond.

The second nine takes off in the opposite direction, and are a bit more hilly than the front. The three finishing holes are among the best on the course. The 17th is a par five, with the approach shot over a gulley to a green below. Quite tricky, since you cannot see the green at all unless your second shot has reached the end of the upper level fairway. The 18th is a nice par four, finishing in style right below the clubhouse terrace. All in all, the course is good, not championship quality, but fun to play.

After our morning round of golf we enjoyed a delightful lunch at the clubhouse. However, some thunderclouds appeared and our planned activities for the afternoon got canceled. With some time left over, I decided to walk the course one more time to take some photographs.

The course was empty and quiet, not a single golfer to be seen. As I walked down the 2nd fairway, I was met by some curious warthogs, with pretty imposing tusks. Luckily, I was more curious than they were, and they trundled off into the bush.

On the 14th fairway, I encountered a couple of zebras. As I approached them they moved away into a clearing, to join a larger group, and I followed along. I suddenly found myself surrounded by about ten individuals, amongst them a young zebra still nursing. They were a bit cautious with me around at first, but after a while, they got used to my presence. Soon they allowed me to walk along only a few feet away from them. After a while, we were joined by a group of antelopes.

The whole experience felt very special, almost magical. I found myself walking alongside the herd for more than two hours, almost until sunset. They got more and more used to me, and went on with their normal business. The young zebra was quite frisky, and ran around and played like a young puppy, seemingly having the time of his life. And so was I. To be out alone with the wild animals was a new, wonderful experience. I have been on organized safaris before, and have thoroughly enjoyed it, but in the national parks you are always confined to the safari jeep, you can never get out amongst the animals. It is always “us and them”. Here on the golf course I was in the middle of the herd, and all by myself. This was an experience I will always remember.

The next day we were in for yet another treat, a visit to Lake Naivasha and Crescent Island. Lake Naivasha is the lake you can see from the 3rd tee on the golf course. It is a large freshwater lake, home to more than 400 bird species. Interestingly enough, it was also hosting an entirely different kind of bird in the past, as a landing place for the Imperial Airways flying boat en route from Southampton to South Africa in the 1930s and 40s.

We set out in small canoe-style boats that hold around eight people. With such a small boat, you have the opportunity to get quite close to the native bird life. You also get very close to the hippos. It’s good that we had a powerful engine, as the hippos are surprisingly fast once they charge at you. Only once did we have to use that capability, though.

I’m not that knowledgeable when it comes to birds, but this must be an ornithologist’s dream. You get right up close with the birds, one species more stunning than the next (except for the Marabou stork, possibly the ugliest bird I have ever seen). We even got to see eagles diving for and catching fish.

Even though I’m not a birdwatcher, I could have continued boating around the birds all day. But there was another treat coming up, a visit to Crescent Island. The island, sometimes a peninsula when the water level is low, is home to abundant wildlife, but has no predators. This means that you can wander around the island (with a guide) and get up close with the wildlife. On Crescent Island there are more animals per acre than in any other park in Kenya. This includes wildebeest, waterbuck, zebra, gazelle, giraffe, buffalo, and hippos. By the way, watch out for the hippos. They sleep most of the day, but when they become active at dusk and dawn, they can be dangerous. Hippos kill more humans than any other animal does. So keep your distance.

As you walk around, the animals go about their business, but they do keep an eye on you. “Who are these people?” they seem to wonder. For while I followed a pair of giraffes, the most graceful of animals. They were leisurely walking around, feeding from the treetops. After a while, as I walked off, the roles reversed. Curiosity had gotten to them, and they were following me, to see what I was up to. I was sad that we had to leave.

You shouldn’t travel all the way to Kenya and the Rift Valley just to play this golf course. The course itself is good but not fantastic. It has several memorable holes, but the reason to come here is for the complete experience: to enjoy the landscape and history of the Rift Valley; to walk among, sometimes right next to, the wild animals on the course; to enjoy the great hospitality and good food at the lodge; to while away the afternoon on the balcony of your cabin, taking in the magnificent views of the valley while sipping a drink and reading a good book; to play relaxing golf in the cool mornings. All of this together makes Rift Valley a fantastic destination, well worth journey. We highly recommend it.

How to get there

The Great Rift Valley Golf Club is very conveniently located. You cannot take the flying boats any more, but you have several options. If you are on a Kenyan safari, the Lodge is located right in between the two major national parks, the Samburu and the Masai Mara. The Lodge has its own airstrip, so it is easy to make a stopover.

If you come from Nairobi it is about an hour and a half by car on the Pan African highway. The last few miles to the lodge are quite bumpy, but a new road is in the works and should be ready shortly.

If you are more adventurous, you can even get here on one of the matatus from Nairobi. This will cost you around $2 and takes a couple of hours. Once in Naivasha, you can hire a taxi for the last few miles to the lodge.