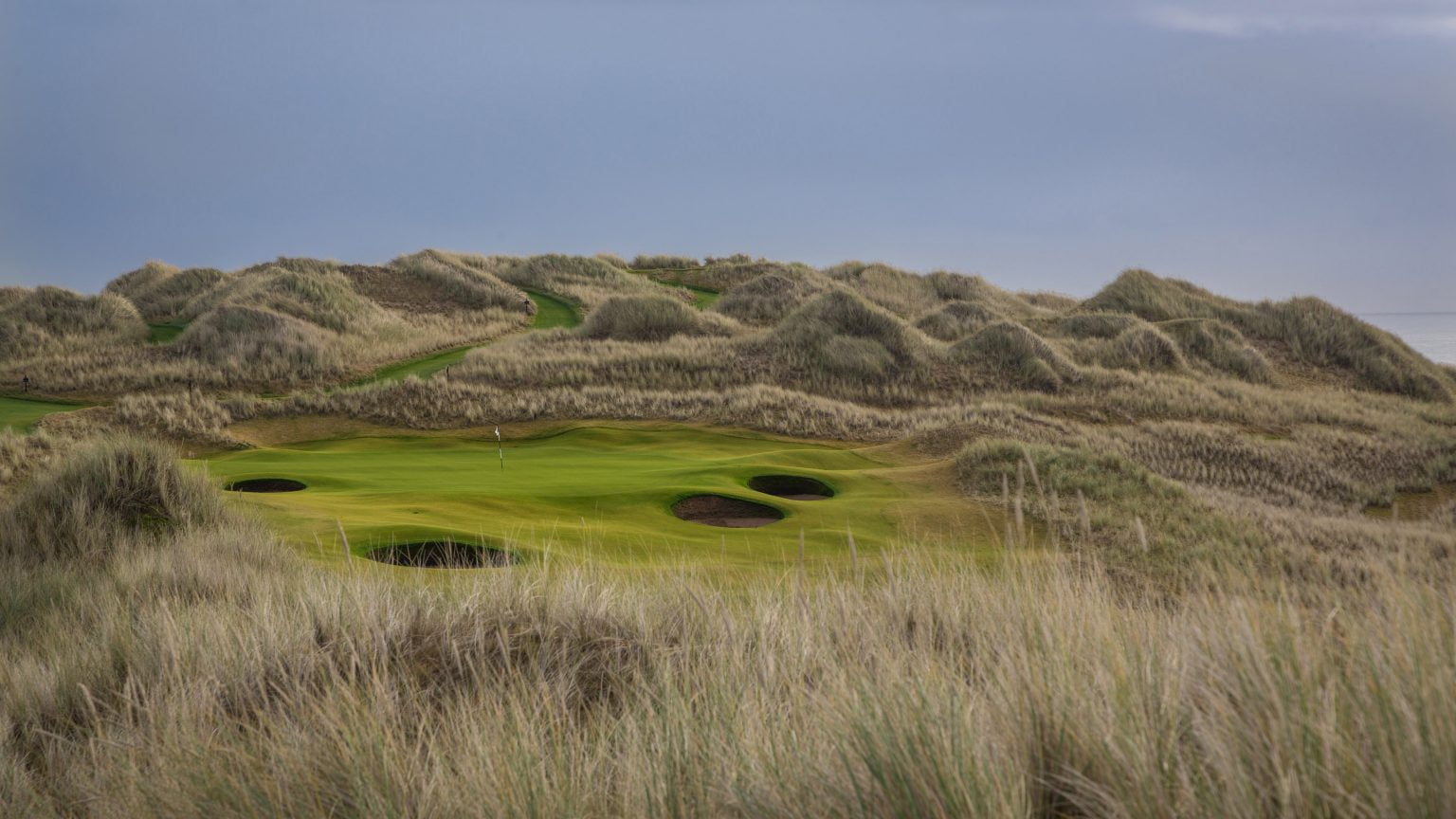 Aberdeen – On top of Scottish golf

When Phil Mickelson played the Scottish Open at Royal Aberdeen, he decided to come early and prepare, staying at the MacLeod House at Trump International Golf Links, Scotland. While staying there, he went out early one morning completely on his own to play the course that Donald Trump unabashedly calls ‘the greatest golf course in the world,’ set in ‘the great dunes of Scotland.’

Trump may be inclined to hyperbole concerning his controversial course, but the more down-to-earth Mickelson was adamant in his praise after his solo round among the beautiful dunes along the North Sea. He called the course designed by Martin Hawtree ‘sensational.’

Mickelson’s praise didn’t stop at Trump. “Bones and I have had a great few days here, getting in a little early, such great golf courses here,” he said. “Royal Aberdeen is a real asset to this tournament,” he said. “It’s a beautiful golf course.”

Mickelson’s accolades for golf in the Aberdeen area could not be more deserved. Aberdeen and the surrounding region in the northeast of Scotland might not be on most overseas golfers’ radar when planning their first trip to the home of golf. It should be.

The Trump course (also called Trump International, Trump Scotland, Trump Aberdeen, or my personal preference, TIGLS) is still maturing after its 2012 opening. It is an amazing experience, but there are plenty of other courses in the Aberdeen and Aberdeenshire area to choose from, including the classic links at Murcar and Cruden Bay, parkland courses Meldrum House, Deeside and Banchory, and the picturesque clifftop course Stonehaven, just to mention a few. Some of the courses are a good deal older than TIGLS. As far as we know, the first golf hole mentioned in writing was the Queen’s Hole on the Links of Aberdeen, in 1625.

Royal Aberdeen is the world’s sixth oldest golf club, founded in 1780 as ‘The Society of Golfers at Aberdeen.’ Their Balgownie links were built in 1886, a classic out-and-back design, with the first nine among the dunes and the second nine on a higher ridge coming back. The back nine are more exposed to the elements, and can be some of the most challenging holes you will ever play if the wind is up.

The effect of the wind could be seen clearly at the Scottish Open. Rory McIlroy amazingly drove the par four 13th hole (436 yards) on the first day, setting up for a total of 64. The next day the wind changed and his drive at the 13th stopped a full 161 yards shorter, at 275 yards.

Justin Rose ended up taking the championship at Royal Aberdeen, and the next day I was lucky enough to be able to play the course with unaltered pin positions from the final round.

Feeling slightly nervous about playing an historic course in such grand circumstances, I entered the clubhouse with a sense of awe. In the search for the ladies’ changing room I was shown by mistake to the visitors’ (male visitors, that is) changing room, which was empty. But feeling more than a bit uncomfortable in unfamiliar territory I was on my way out of it to continue my search, when I almost crashed into a gentleman heading into it. To my surprise, it was Alex Salmond, first minister of Scotland, who didn’t seem at all surprised to meet me in this most unlikely of places. After an introduction from my host Andrew Shinie of Scottish Golf Trails, a hearty handshake and a few pleasantries he moved on, in a hurry to put his golf shoes on – in fact, he would be teeing it up ahead of us.

I was relieved not to have to play from the men’s tees of the Scottish Open, which brought the course to a sturdy 6885 yards. But my playing partners both took on the challenge, brave souls.

From the first tee you can see that Aberdeen is known as the Oil Capital of Europe. Although some people shudder when they see the gathering of supply ships in the North Sea, just in line with the first green, I thought it gave the place character. Apparently they like to hang out there, as it’s ‘free parking’ while they wait for assignments.

The course was plenty long enough for me, something I experienced already on the 3rd tee, a par three of 207 yards from the reds (!) with a sea of knee deep rough and a couple of scary bunkers before the green. Who said golf should be easy?

Balgownie is in fact known as quite a difficult course, and the members here are usually very good golfers. “We don’t take a lot of groups here,” says Shinie, who specializes in organizing golf trips to the northeast of Scotland. Unless there is very little wind, it’s too difficult for the average player.

Difficult doesn’t mean impossible. The 7-handicapper playing with us managed a couple of birdies on his round – well done with the setup for Tour players on the final day. Let’s not talk about the holes with lost balls in the rough, which seemed to unfairly crowd those narrow, billowing fairways. The wind did pick up on the back, as expected.

But even if you don’t post a score to remember, you will remember this course, generally acknowledged as one of the great Scottish links.

After being beaten up (in a nice way) by Royal Aberdeen, we toured the granite city, abuzz with oil industry wealth and trendy hotels and bars. On the way back to the exquisite Tor Na Coille hotel (tornacoille.com) in the nearby town of Banchory we stopped by Deeside Golf Club to look at the course. There we bumped into another famous Scotsman and local Aberdeen hero, 1999 Open winner Paul Lawrie. He was all smiles, having spent the day practicing at Deeside in preparation for the Open Championship at Hoylake.

The next day it was on to the course that every golfer in and outside of Aberdeen seems to have an opinion about, Trump International Golf Links, Scotland.

The ornate black and gold Trump signs at the Menie Estate are Donaldesque, obviously out of place in this part of Scotland, where discreet modesty seems to rule. The small temporary clubhouse is finely understated – something that I doubt the permanent clubhouse will be when it is built (the plans for a second course and a large hotel are indefinitely on hold while the politics of planned wind turbines and Trump’s row with the first minister play their course.)

Politics aside, it is difficult not to love this course from the instant you set foot on the 1st tee. The round, as intended by Hawtree, is one of discovery. Each hole is its own little world, and you follow the 18-hole track as you would a maze.

Never mind that the course is still settling in. The typical fescue grass of Scottish links courses hasn’t fully taken hold yet, and the greens need a couple more years to play as smooth and linksy as they should.

There are six sets of tees and 110 separate tee boxes. You are advised not to play the back tees unless you are Phil Mickelson or of similar caliber. The rest of us move forward a bit, ambling to the back tees on a few of the holes to catch the views. Most of them are truly breathtaking. People with an interest in photography tend to scramble round the greens, up the sides of the dunes, getting good angles of every hole, each striking in its own way.

The greens, the swaying grasses, the revetted bunkers, the dunes, the sea, the wind – take it all in.

I especially liked the par threes. The 3rd hole gives you the first meeting with the beach, which comes right up to the green in dramatic fashion. After just two years of existence the look of the hole has changed due to some winter storms, revealing more clearly the remains of a German wartime bunker on the barren beach.

The 6th heads back toward the clubhouse, engulfed in the sweeping dunes, with the shoreline visible in the distance on the right. It’s do or die. The 13th is a short par three, the only hole that heads straight toward the sea, framed by a range of almost lunar-looking cone shaped dunes. The 16th is the final par three, with a host of pot bunkers on the left and at the front, ready to pounce on your mistakes.

They say the back nine are more spectacular than the front (at least that’s what the starter told us after we played nine) but I think they are equally great.

My only lament, after a full 18 holes, is that it’s impossible to play this course on a regular basis without being independently wealthy. The green fees are a stinging £195 for non-residents.

It’s a good thing that there are 69 other courses in the Aberdeen and Grampian area of Scotland to choose from for that weeklong trip you’re planning.