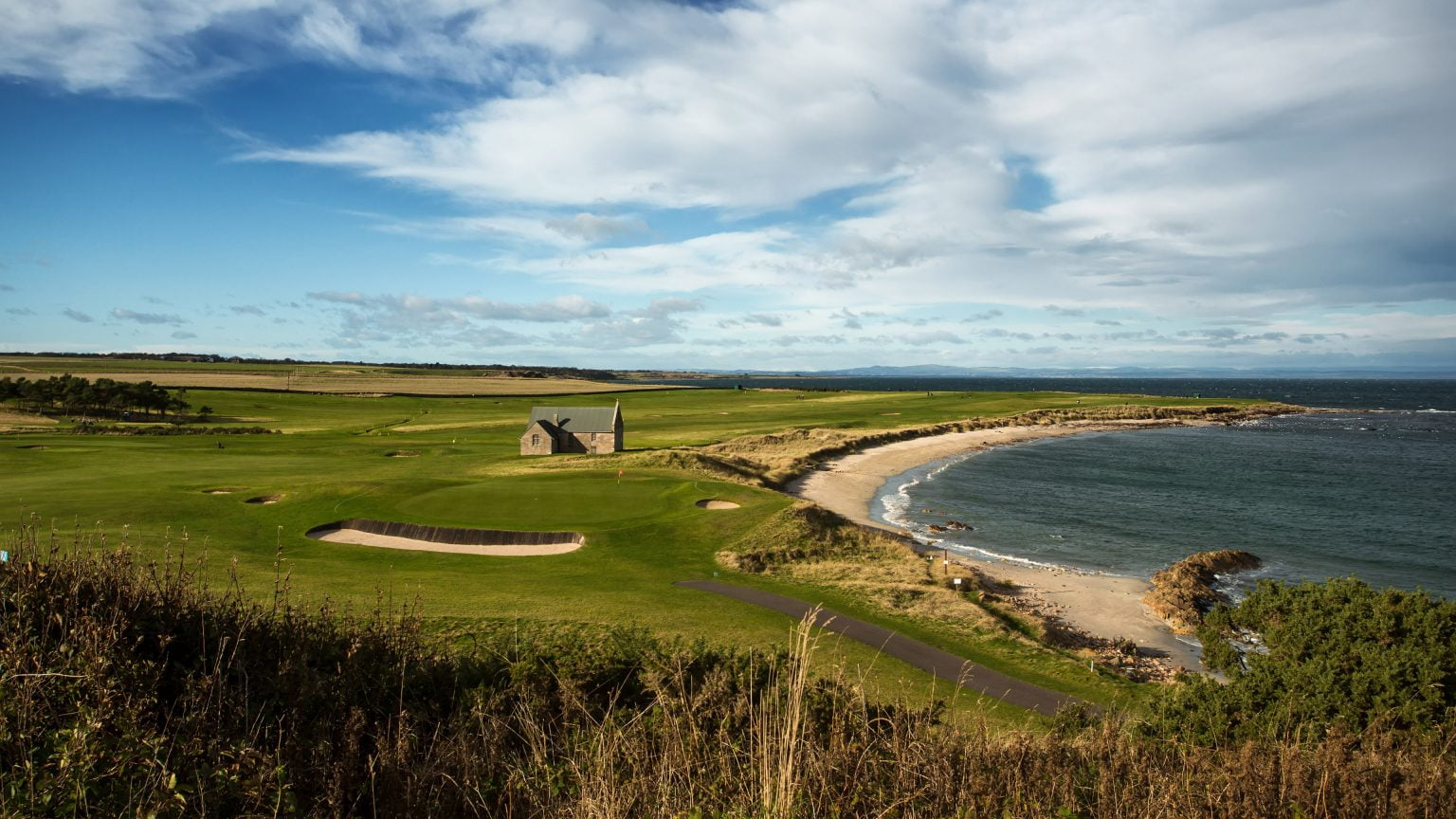 One February day in 1786, a group of golfing enthusiasts gathered in the local coaching inn at Crail in the East Neuk of Fife, Scotland. While drinking ‘Mother Duff’s Punch’ – a mix of brandy and claret wine – they wrote the bylaws of the Crail Golfing Society.

The 11 original members of the society proclaimed in writing that they were “fond of the diversion of golf.” It is known that the earliest golf club members tended to be just as devoted to drinking and gambling as they were to athletic endeavors. In spite of the punch, they managed to get all the most important information down in writing and presumably soon returned outdoors and resumed play on their original course, Suchope links, located on what is now a camping ground near the town of Crail.

Today, East Neuk of Fife is still one of the world’s greatest places to play golf. If you love links golf, gorgeous scenery, and are up for a bit of wind to wreak havoc with your game now and again, Crail is the place to go. It feels wilder and closer to the waves than any of the famous links courses in St Andrews. It also happens to be the world’s seventh oldest golf club.

Crail Golfing Society has two courses today, Balcomie Links and Craighead Links. The oldest and most famous course is Balcomie, where the club’s members started playing in the mid-19th century, on links land that was used for grazing sheep. It was none other than Old Tom Morris who was brought in to Crail from neighboring St Andrews in 1895 to redesign the first nine holes, where the club had been playing since about 1855. Five years later he expanded the course to 18 holes. Anyone who has played Balcomie knows what a fun course it is, and also how welcoming the club members and staff are to visitors. It’s not uncommon either for foreign visitors to become so enthralled that they sign up as members – the club prides itself on giving good rates to non-locals.

Balcomie Links is not a very long course at all, at only 5359m from the white tees, playing as a par 69 for men from the back, par 67 from the yellows and par 72 for ladies from the reds. But the holes, some of them slightly quirky or at least unusual, seem to bring together a sense of whimsy and playfulness with a love of the spectacular nature of the Scottish coastline.

You can play Balcomie five days in a row and never feel like you’ve played the same game – the weather and the wind will throw new challenges at you around every turn. It starts with an ‘easy’ and short downhill par four, where the big hitters can almost drive the green. But try not to shank your approach into the old stone boat house (something I’ve done) or roll it past and into the small burn behind the green (something I’ve also done).

The next holes are all along the shoreline. It would be an advantage to have sorted out your slice prior to arrival, as anything that tails right risks heading out into the North Sea (will I bore you if I say I’ve done that as well?).

The 4th and the 5th holes look similar, daring you to cut off some distance over the beach – but the 5th is a few notches up in difficulty.

“It’s not for nothing it’s called Hell’s Hole,” says captain Eric Morris of the 409 meter long par four. “It’s hard to believe it’s a par four when you stand on the tee looking out. There have only been two 2’s ever recorded there in championship play.” Morris is actually a distant relative of Old Tom. The Morris family continues to put its mark on golf in the East Neuk of Fife, as Eric’s brother George was responsible for one of the famous eagles on Hell’s Hole.

Another interesting couple of holes are the two par three’s by the clubhouse, the 13th, heading up the hill, and the 14th going steeply down again. The 13th is one of the most memorable par three’s you’ll ever play. It is up, up, up and quite long, at 196m from the back. If you’re short you might end up in the steep embankment. A driver is too much. Good luck. For ladies, the hole is a par four, and the strategy from the reds is usually to lay up on the left side of the embankment. The 14th is the most photographed hole on the course, as the green lies down below, next to the shore, protected by a couple of deep bunkers in front and more on the sides. With the boathouse in the background, it makes for a stunning shot. Let’s hope your golf shot matches in quality.

Don’t forget to take a look at Constantine’s Cave between the 14th green and the 15th tee. It is claimed that King Constantine II was killed by Vikings and his remains were brought to this cave in the year 943. If only they had been persuaded to play golf, they might have had a more peaceful outlook on the world.

Crail is not only about the history – it also has one of the great modern courses of the area, Craighead Links (6147m, par 72), where the Junior World Championship was held in 2000. It’s not technically a links course, as it is laid out mostly on land that was previously used for farming. But many of the holes have a linksy feel. The course, which opened in 1998, was designed by the American architect Gil Hanse, who since has gained fame as the designer of the Olympic course in Rio de Janeiro, and is also responsible for the redesign of Trump’s Blue Monster at Doral in Florida.

One of the interesting features of Craighead is an ancient stone wall that criss-crosses some of the holes. On the 11th hole, that stone wall dares you to take it on – it seems just close enough so that you may be able to drive over it. Don’t let your optimism ruin your round.

The best holes of Craighead are on the back nine. The 14th, called ‘Lang Man’s Grave’ is a par 4 of 376m, offering panoramas of the North Sea. The green is protected by a cliff, making the approach a little nerve-wracking.

If you end up being overmanned by the stone walls, the gorse, the cliffs and the undulated greens, not to mention the wind, don’t worry – you’ll find your solace in the clubhouse. If you ask in the bar for ‘Mother Duff’s Punch’ you might get a laugh. Instead, order a pint of lager and a hearty plate of fish & chips. Take in the vistas. Watch those poor but happy folks standing below you on the 18th tee of Balcomie, trying to hit the green of the par three from 183m, over a sea of gorse.

You will want to come back and do it all over again next year.