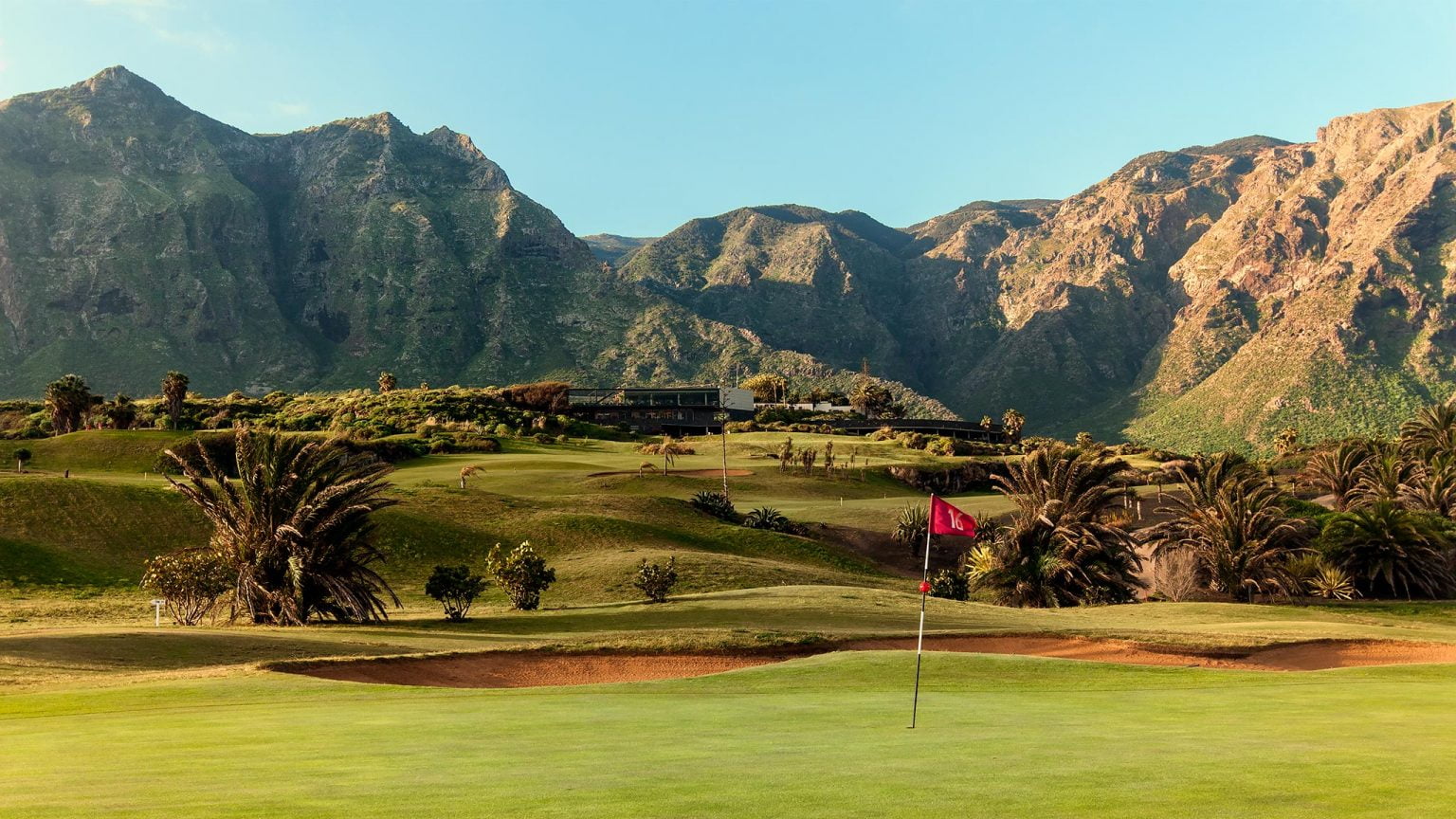 Tranquility in Tenerife – Golf in the quiet north

If you have ever been to the tourist areas in the south of Tenerife, tranquility may not be the first word that comes to mind when describing your vacation. But there’s another side of Tenerife.

If you have ever been to the tourist areas around Playa de las Américas in the south of Tenerife, tranquility may not be the first word that comes to mind when describing your vacation. While southern Tenerife is a paradise for frozen northerners, with beautiful beaches, plenty of sunshine, and a year round temperature of around 25C, life can be pretty hectic.

But there’s another side of Tenerife. We flew in to Santa Cruz de Tenerife in the northeastern corner of the island to explore the unspoiled north coast.

After picking up or rental car, our first stop was the Real Club de Golf de Tenerife, located just minutes from the airport at Santa Cruz. The club is the second oldest in Spain, founded in 1932 (the oldest club is also in the Canary Islands, on Gran Canaria).

In preparing for the trip, we used Google Earth to look at a satellite image of the course. Laid out in a narrow rectangle, it looked like a rather boring piece of farmland next to the freeway. Our expectations were low.

We couldn’t have been more wrong. While the first hole is indeed relatively flat, the course quickly climbs up on the hillside with some rather narrow and tricky holes. As you continue to climb, you have to think strategically, as you encounter some fairly steep ravines. Getting up even higher, you are treated to some spectacular views of Teide, the main volcano on Tenerife. When you get to the top, you have climbed over 300 meters. As it turns out, the course is about as far from boring farmland as you can imagine. You’ll be constantly challenged by level changes, making it tricky to judge how far your ball will carry. There are some strategically placed bunkers, and a few ponds, but the main difficulty remains narrow, tree lined steep fairways. A challenging and enjoyable course that we can recommend.

The course is located in the greenest and coolest part of Tenerife, so course conditions are good throughout the year. Since the course climbs to almost 800 meters, be prepared for cooler conditions, especially in the morning, when you can encounter some fog. And if you have any problems at all with walking, plan on using a buggy.

Real Club de Golf is a primarily a members club. You won’t find many tourists; the atmosphere is very Spanish, and a bit more formal than at other clubs on Tenerife. Make sure to reserve a tee time before you arrive, and don’t plan on visiting on the weekend, as Saturdays and Sundays are for members only.

Going south from Santa Cruz, we followed the main divided highway, TF-5. You can drive down to the coast and visit several nice coastal towns and villages, but there is no coastal road per se, you have to go to the coast and then come back to the highway. TF-5 is a freeway about halfway down the coast, but at the town of Carrera it turns into a two way highway, and eventually into TF-42, however still a very good road.

As the road narrows and starts to hug the coastline, you soon encounter the town of Garachico.

Garachico may be the unluckiest town you’ll ever visit. It has endured natural disasters like fires, storms, and floods. As if that’s not bad enough, it also suffered from locust invasion and bubonic plague. And to top it all off, there was the 1706 volcanic eruption that destroyed large parts of town, and, most importantly, the harbor that was the source of the town’s wealth.

What’s left, you may wonder. A surprisingly beautiful and quaint little town, with a distinct Mediterranean feel, but with a Canarian twist. The streets are cobbled and lined with restaurants and stores, some touristy but most quite genuine. There are several well restored churches worth visiting, including the Church of Santa Ana. Behind the church you can see the remains of the old harbor that was destroyed in the volcanic eruption. And don’t miss (actually you can’t miss) the harbor, with volcanic rock left over from the eruption, now formed into tide pools that also double as natural swimming pools. Scuba diving and snorkeling are popular pastimes, as is fishing from the pier.

When you have finished your sightseeing, stop at the main square next to the main church, where you’ll find a small bar and a bandstand. On weekends the square is full of locals, and you may even get to hear some live Canarian music.

From Garachico it is a short drive to the town of Buena Vista del Norte and our destination, Buena Vista Golf, just outside town.

Buena Vista means “beautiful view”, and that is exactly what you are treated to when you arrive. From the clubhouse terrace you have the entire course at your feet, with the Atlantic Ocean as a backdrop.

The course, designed by none other than Seve Ballesteros, is fairly long at 6019 meters. It starts out at the high, inland part of the property. The first few holes are pretty straightforward, but not dull, and the course gradually improves as you go along. The ninth hole is the nicest on the front, running parallel to the 18th, finishing with a green guarded by hills, sand, and water.

On the second nine, it gets exciting right away. The 10th hole runs straight downhill towards the ocean, finishing with a green right next to the seashore. The left part of the green is defended by a large sand trap shaped like an “S”, a trademark of Seve Ballesteros.

You then work your way uphill again almost all the way to the clubhouse, and then back downhill on 13. The rest of the course is quite spectacular, running along the coastline. Hole 15 is the most beautiful of them all, a long (185 m from yellow) par 3, hitting into the ocean breeze. Miss to the right and you end up on the rocky shore or in the ocean.

The beautiful 16th and 17th holes run along the ocean cliffs, and then the 18th, a par five, takes you back to the clubhouse, with the green heavily defended by both hills, streams, and a lake. A fine finishing hole that could be challenged by long hitters, a good setup for an exciting finish to an even match.

While the course is an excellent challenge for golfers of all skill levels, it is not the only reason to come to Buena Vista for a golf holiday. Right next to the course, just above the clubhouse, is the five-star Vincci Seleccion Golf & Spa Hotel. Many of the 117 very well-appointed rooms have balconies with a stunning view of the course and the ocean. The hotel is designed to remind you of a Spanish finca, complete with a central square. It has all the amenities, including several heated pools, a spa, and a couple of restaurants, one a buffet and one a la carte. You would be hard-pressed to find a finer combination of golf and hotel.

While we could easily see ourselves staying at the golf course and hotel for an entire holiday,you could also venture out. Quite nearby, within easy walking distance, is the town of Buena Vista del Norte. There you’ll find a number of restaurants in different price segments. If you come at the right time, you can also enjoy one of the local festivities.

If you, against all odds, get bored with the tranquility of the north coast, it is possible to day trip to the golf courses on the southern side of the island. It is about an hour and half of driving in mountainous terrain in the shadow of Mount Teide, but it is a very beautiful journey, well worth the effort. We started at 7 in the morning, and managed to tee off at 8:45 at Golf del Sur, the southern golf course farthest away from Buena Vista. We even managed to play another 18 holes at Adeje in the same day. But  that is another story.